Joe Martin works on one of his many canoes in his forest workshop. (Photo submitted by Joe Martin)

Just south of Tofino, in the traditional lands of Tla-o-qui-aht, Joe Martin can be found carving a new cedar canoe.

This project is a 22-foot long Nuu-chah-nulth style canoe that he is carving with Gary Martin, which will be in honour of his great, great grandfather.

“I was taught (how to carve) at a very young age, by my father and grandfather,” Martin says, talking about the traditional ways of canoe carving.

Back then, he would use the traditional carving tools, which are stone, bone, and fire. Today, Martin uses tools available at any local hardware store, a saw, wedges, hammers, and chisels. But where he carves still remains the same; Martin carves all his canoes out in the forest.

“It’s where I can get back in touch with the land,” Martin explains.

Martin talks about the protocols and laws of the land regarding canoe carving, specifying that they are intended to “provide our need, not our greed.” He also stresses the importance of picking the right tree, one that doesn’t house bird nests, or a shelter for wolves or bears. Felling a tree in the proper season is important as well, cutting one down in the fall or winter so as not to disturb as much wildlife in comparison to the warmer seasons.

Martin is carving a second canoe with Don Williams Jr, which will be a 24-foot Haida-style canoe. Martin goes on to explain that in a Haida-style canoe, the bow is slightly raised and angled back, while the stern is slanted and finely curved upwards. A Nuu-chah-nulth-style has a raised bow, and the stern is almost straight upwards. The two different styled canoes Martin is carving both came from the same cedar tree. 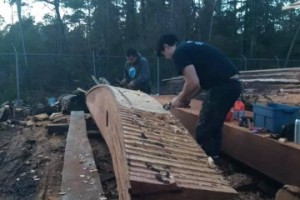 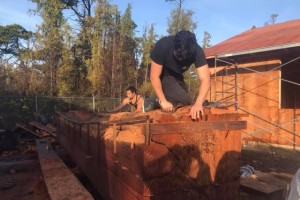 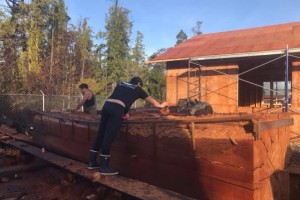