Hesquiaht artist Tim Paul (right) has been commissioned to make a totem pole at the University of Victoria to mark the UN International Year of Indigenous Language. Paul plans to make the pole at the workshop of Tseshaht carver Gord Dick (left). (Denise Titian photos)

2019 is being celebrated as the UN International Year of Indigenous Language and the University of Victoria has been chosen as one of the sites for a major UNESCO project.

The UN International Year of Indigenous Language – Language Revitalization Pole has been commissioned by the First Nations Education Foundation (FNEF) and Hesquiaht master carver Tim Paul will design and carve the pole.

The red cedar log, estimated to be 800 years old, is a windfall and comes from Huu-ay-aht traditional territory. In yet another Nuu-chah-nulth connection, the pole will be carved in Port Alberni at the workshop owned by Tseshaht master carver Gord Dick, who told Ha-Shilth-Sa he would be honoured to help work on the pole if Paul would let him. With his signature warm smile, Paul told the younger artist he would welcome to contribute.

Master carver, artist and Hesquiaht elder Tim Paul says this pole will symbolize the importance of language and cultural teachings for Indigenous peoples.

“It is especially important now because of who we are today with English being our first language,” said Paul. But he has confidence in the next generations and their ability to keep the languages alive.

“Uncle Mo said dictionaries are good, we learn words, but we also need to learn to speak to each other with it,” said Paul.

Over the years Paul has worked with dozens of Nuu-chah-nulth elders who have documented their himwitsa (Nuu-chah-nulth storytelling, usually by elders to children to pass on life lessons). “Some of these stories have been saved and can be transferred to new technology and the kids know how to use these devices; they can take it home with them,” said Paul.

Paul said he has been working with younger Nuu-chah-nulth people in language immersion programs.

He expects to begin carving the pole sometime in February or March, depending on when they can get the log to Port Alberni. He has already drawn a conceptual design which he says incorporates the teachings of 18 Nuu-chah-nulth women that he’s worked with over the years and who gave everything they had in terms of teaching language and culture.

“I need to recognize and thank them,” he said.

The theme for the pole is ten relatives of the Nuu-chah-nulth people: sky, sun, moon, mountains, rivers, lakes, land, sea, wind and stars. There will be an eleventh relative included on the pole, earthquake, which is sent to teach humility and remind human beings of the all-encompassing power of the creator.

“Oral history, songs, dances, ceremony, and art were – and continue to be – the vehicle for transmitting history, knowledge, and sovereign rights from generation to generation,” said Paul in a FNEF media release.

“Through storytelling we are also reminded of our family ties to neighboring tribes and nations. When we use our language, it is not just another way of saying something; the principles of our culture are embedded in the language and many words simply cannot be translated. It is only by understanding our language that we can unlock the most important values, principles, and concepts of who we are,” he continued.

The pole will have a very special name relating to the material it is made of – cedar, which is meaningful to coastal First Nations as a life-giving tree; and more so to Paul, because it is the name of his Hesquiaht grandmother.

Once carving begins a documentary film crew will record the entire process. The material will be used in education tool kits for distribution to the 11,000 UNESCO Associated Schools Network in over 180 countries.

According to a UVic news release, the pole will be a centrepiece of the year and a significant point of reflection for UVic’s ongoing commitment to the work of decolonizing and Indigenizing the university.

“We’re honoured that UVic was chosen by UNESCO and the First Nations Education Foundation as the permanent host of the Language Revitalization Pole,” said UVic President Jamie Cassels. “It will stand as a powerful reminder of our need to embrace the truth of our country’s history, to fulfill our commitments to reconciliation and to meet the challenges that lie ahead, especially with respect to Indigenous language revitalization. The pole will also be a living acknowledgement of the traditional territories of the Songhees and Esquimalt First Nations, the land upon which UVic stands.”

Les Doiron, volunteer chief executive officer of FNEF and elected President of the Ucluelet First Nation's government talked about the importance of the pole.

“This pole will not only raise awareness of the threats facing indigenous languages in Canada and around the world, it will also draw attention to the urgent need to advance reconciliation and healing by supporting Indigenous peoples and communities in their efforts to preserve and promote their languages and cultures through innovative solutions,” he said.

Paul said the pole will be complete this fall and the raising ceremony should take place in late November 2019. 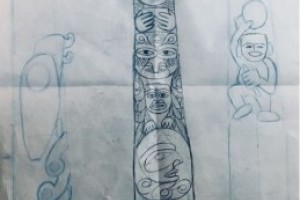 The totem pole, depicted here in a draft, will symbolize the importance of language and cultural teachings for Indigenous peoples.