Josh Charleson stands amid a collection of logs that choked salmon the passage of salomon from Hesquiaht Lake after severe storms. In December a group of volunteers cleared the logs through a coordinated effort. (Photos submitted by Joshua Charleson)

A log jam caused by a series of landslides triggered after an early November rainstorm has been cleared, thanks to the efforts of several volunteers, non-profit agencies and First Nations neighbors.

According to NTC Fisheries Technician Joshua Charleson, the floating log jam threatened to wipe out salmon spawning beds as the mass struggled to push its way to the ocean through a short creek.

The slides occurred Nov. 8, 2018 after a heavy rainstorm. Woody debris spilled into Hesquiaht Lake, which, according to Charleson, contained live salmon at the time.

Charleson went to the lake Nov. 7 to perform a salmon escapement count when he first saw the wood-choked lake.

His parents, Steve and Karen Charleson, are the lone residents near the lake and they were notified of the destruction, which included the washout of the logging road on each end of a bridge that connects them to a sheltered inlet where they keep their boat.

Charleson also notified the B.C. Ministry of Forests at that time, which sent a helicopter Nov. 20 to survey the area.

The senior Charlesons made reports every few days on social media noting the movement of the debris field as it pushed toward the ocean, but the log jam got bigger and there was no indication that help would come from government.

“It’s a short river (between the lake and the ocean) and the logs were rubbing the spawning beds,” Josh Charleson explained.

Hesquiaht Lake is a tidal one, so the logs would drift back and forth with the high and low tides, scrubbing the gravel beds and destroying the salmon eggs that were just deposited there.

There was also concern that the more the log jam built up the more risk to the logging road bridge that connects Hesquiaht to Stewardson Inlet.

“The ministry didn’t send resources because they don’t have any,” said Charleson, who went on to say that it’s a big problem. “They (government) say wild salmon is important, but apparently not so in remote places; if these slides happened near a city they’d have it cleaned up immediately.”

“I have a good relationship with the Central Westcoast Forest Society (CWFS) and I reached out to them for help,” added Charleson.

More help came from NTC’s Uu-a-thluk (fisheries) staff, Maaqtusiis Hahoulthee Stewardship Society, and Hesquiaht Fisheries in the form of fuel, equipment and manpower. A date was set to do the work.

A total of 12 volunteers joined up with Steve and Karen Charleson at Hesquiaht Lake on Dec. 5, 2018.

With little more than chainsaws, rope, pulleys and muscle, a channel was cleared in one day. The debris field made its way freely to the ocean and the lake cleared.

“We need to have a process to deal with this in the future because it’s going to happen again with the weather patterns the way they are – it’s not fair to leave this on the backs of the small, remote communities,” said Charleson. “There should be a mechanism within government in place to deal with this – right now, it’s nobody’s responsibility.”

“It’s pretty awesome that small organizations can come together like this,” he added, referencing the name of the river that connects Hesquiaht Lake to the ocean. “Dad said we saved Tsaya.” 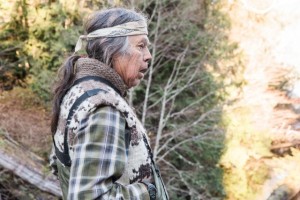 Steve Charleson lives by the remote lake with his wife Karen. 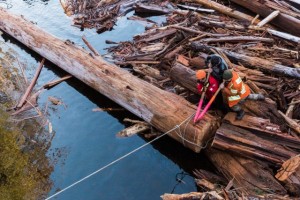 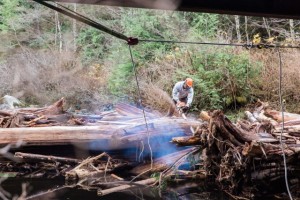 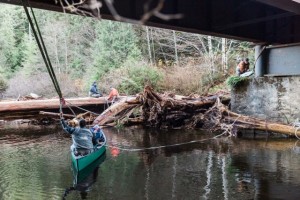 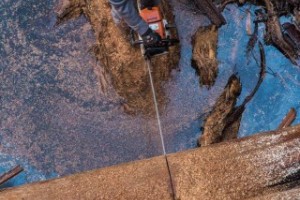 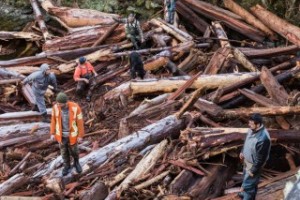