Troy Johnson Atleo Jr. was born in the back of a pickup truck Monday on the Ahousaht dock as his parents tried to rush him to hospital. He has since been airlifted to the Victoria General Hospital, where he is doing well, according to mother Kazz Thomas-Atleo. (Photos submitted by Kazz Thomas-Atleo)

Family Day, Feb. 18, 2019, has taken on a whole new special meaning for the Atleo family in Ahousaht. Troy and Kazz Thomas-Atleo were nine weeks away from the due date of their newest child but the baby had other plans.

But it was still too early for baby to come, so the first warning signs were noted but explained away as false labor or Braxton-Hicks contractions.

“He (Troy) called his sister down after 9, they said it was just baby making room,” said Kazz.

She was told to try a warm bath. But she was concerned because her pains were consistent and coming minutes apart. Even with a warm bath the pains grew stronger, and, even more alarming, Kazz had started bleeding.

Ahousaht is an isolated community accessible only by boat or float plane. The closest hospital is approximately 40 minutes away by boat. Ahousaht’s first responders and extended family members were called and the decision was made to rush Kazz to the hospital. But by that time Kazz’s labor was so intense she couldn’t walk down the stairs.

A stretcher was brought in and she was carried to the back of a pickup truck that would bring her to a waiting boat at Mattie’s Dock in Ahousaht.

But as the anxious parents made the bumpy ride down to the dock Kazz yelled out that the baby was coming.

“I was ready to get carried off (the back of the truck) and I yelled baby’s coming out!” she told Ha-Shilth-Sa.

The birth happened so quickly that the first responder didn’t realize that baby was already there.

People started yelling for scissors but there were none and they had to make-do, tying the cord off with a shoe lace.

“It was scary; I heard him cry and they passed him to me,” said Kazz.

She held her newborn son, who weighed in at four pounds eight ounces. He was born at 11:25 a.m.

“They carried me to the boat and he was crying in my arms, moving around the whole way down to Tofino,” she said.

Baby Troy, according to his mother, is doing amazing at the NICU (Neonatal Intensive Care Unit).

His stay in the hospital is expected to be a short one. From there he will join his older siblings from their blended family, Karlee, Cara, Alice, Pearl and Zander, in Ahousaht.

“He just made family day what it is! He said it’s time to make this family whole!” said Kazz. 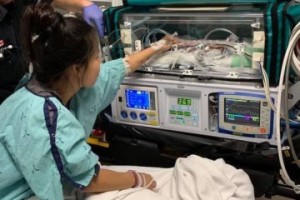 Kazz Thomas-Atleo cares for her newbrn son as they await transport from the Tofino General Hospital. 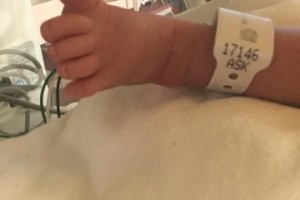