Four Nuu-chah-nulth athletes from Port Alberni made it to the Special Olympics BC Winter Games last weekend (Feb. 21-24) in Vernon. These athletes come from various communities across the island, but share one thing in common: Their love of sport. Louisa Johnny, Taylor Atleo, Dakota Tate and Lee-Anne Billy all participated in the sport of their choice, each walking away with a medal.

“I’m very proud of her. She did such a great job, and the coach from Cowichan felt the same way… He was very proud of all our athletes,” said Barb Vanzoeren, coach of Billy’s floor hockey team. Barb has been coaching people with disabilities for 35 years. Sometimes her athletes make it to the Olympics, and sometimes they don’t—so the times they do are a success to her.

“She’s played for two years,” Vanzoeren said of Billy, “and she’s improved immensely over the two years. This tournament we just went to…she was awesome. She took on four guys that were bigger than her, and held the puck against them.”

According to Vanzoeren, it takes practice and hard work to get an athlete to the Special Olympics, but most of the people she’s coached really love what they’re doing, so it makes it easier. The athletes are chosen to go based on their scores in a “qualifier” game which happens almost a year before the SOBC winter games happen. These Special Olympics are for people with intellectual disabilities, rather than physical.

Billy’s team was told last September that they’d made it to SOBC, so since then, they’ve been prepping. And their efforts paid off with them winning a bronze medal.

“It was just going to be me and 12 guys…but then we picked up another girl in Cowichan…So, it was me and another girl and 11 guys,” said 31-year-old Billy.

When asked if it was hard being one of the only females on the team, she replied, “No, it was fun.”

And for her, it wasn’t so much the game that was the highlight of her weekend, but that she was able to help a friend. A friend she rarely sees, who struggles with anxiety in large crowds, was having panic attacks during the opening ceremony. She helped him stay calm, and he stuck by her for the rest of the weekend as a result. Her friends are even more important than winning.

“The most exciting part was I met a couple of new friends there in Vernon, and I seen a couple of my old friends that I never get to see, because they’re out of town. It was nice to see them,” said Billy.

Taylor Atleo was in Vernon for five pin bowling. His mother says he is dedicated to the sport, though he might feel more humble about that himself. He plays every Saturday all season, in tournaments in between, and sometimes even just for fun.

When asked what it is that keeps him playing the game, Mrs. Atleo replied, “The whole team… everybody’s got such a different aura when they’re all bowling together, holding each other up, and making sure everybody’s on their game…It’s just amazing,” she said.

Taylor has cerebral palsy, so his life has involved some significant struggles, said his mother. He was raised in Tofino, but the family moved to Port Alberni six years ago because of the better services Taylor could find there. And he found bowling right away. He had never been able to play on a team before, so both him and his mother were happy to have found that opportunity.

“I’m feeling good,” said Taylor of his weekend in Vernon.

In his performance Taylor hit a point mid-game during a lull when he wasn’t scoring quite as high as he wanted.

He added that sometimes he gets nervous when he doesn’t really know what his score is. But he is always thankful when the coaches help him with this.

When Taylor found out his team won the silver, “his heart was pounding right away” with excitement, he said. 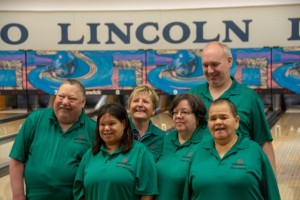 Louise Johnny, front left, won a silver medal with her bowling team at the games. 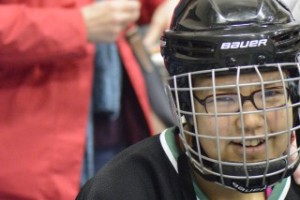 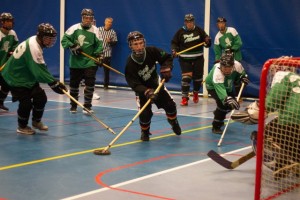