Edge of the Knife, a Haida film, will be shown at the Paramount Theatre in Port Alberni on March 10. (Isuma Distribution International photos)

Denny Durocher is hoping a film being shown at Port Alberni's Paramount Theatre next month will be one that inspires people to action.

Edge of the Knife, a film made entirely in the Haida language, will be shown at the theatre on March 10. This will be the lone local screening of the film. Durocher is part of the committee which brings in selected movies as part of the Alberni Valley Museum's education and outreach program.

Edge of the Knife, set in Haida Gwaii in the 1800s, follows the story of a pair of extended families at their annual fishing camp. Tragedy seeps into the film as one individual is separated from the rest during a storm. Believing that he has died, the families depart the camp for their winter homes. But the man presumed dead does indeed survive and goes into the forest where he transforms into the legendary Haida Wildman.

There are less than 20 fluent speakers of the Haida language these days, making it a critically endangered one. Durocher believes Nuu-chah-nulth members who see the film, made with a Haida cast, will be encouraged to help save their own ancestral language.

“I think it will inspire the people here,” Durocher said of Nuu-chah-nulth residents. “The film shows they’d do anything to recover the language. People have to get out of their comfort zone, off the couch and do language recovery.”

Though Edge of the Knife is in Haida with English subtitles, Durocher also believes Nuu-chah-nulth members who see the film will be able to make a connection.

“The languages are as close as German is to Mongolian,” he said. “But Haida Gwaii looks like the Nuu-chah-nulth. The people here are going to respond to the look and feel of the people.”

Shelley Harding, acting manager of the Alberni Valley Museum, said Edge of the Knife is one of seven films that will be brought in locally this year as part of a series. Paramount seating can accommodate about 400 moviegoers.

“It’s a fundraiser for us,” said Harding, who is also the education curator at the museum. “And it’s an opportunity to bring in films to the community that wouldn’t (ordinarily) come here.”

Renowned Nuu-chah-nulth artist Ron Hamilton (Haa’yuups) will be providing an introduction to Edge of the Knife prior to its Port Alberni screening. Haa’yuups, a Hupacasath First Nation member, has already seen the film. He expects Nuu-chah-nulth members will have mixed reactions to the film.

“There won’t be a unified reception to it,” said Haa’yuups, who last year was appointed the co-curator of a project to update and restore the Northwest Coast Hall located at the American Museum of Natural History in New York City.

Haa’yuups believes the filmmakers did a fantastic job with their portrayal of the Haida Wildman. Though both the Haida and Nuu-chah-nulth people are West Coast residents, Haa’yuups said there are language differences.

“We’re not a monolithic people,” he said, adding some of those who watch Edge of the Knife will not enjoy the fact they have to read subtitles.

Haa’yuups added the fact the entire film is in Haida - and children in the film are speaking the language - will assist somewhat in language recovery. 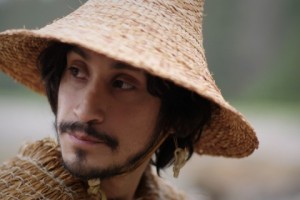 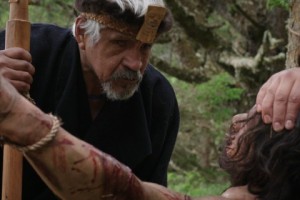