Kalilah Rampanen cleans a bear hide during the Gathering Our Voices event at the Secluded Wellness Centre on March 20. (Deborah Potter photos)

In the crisp morning on March 20 the children of the Rampanen family displayed the traditional Nuu-chah-nulth way of tanning bear hide, as well as a couple tips and tricks from their Cree side of the family, for the Gathering Our Voices event at the Secluded Wellness Centre.

The bear hide Kalilah Rampanen was stretching out on a wooden frame made from alder wood was a gift from a family friend. The bear was a young cub that was donated to them by a conservation officer.

“It’s best to get one in the fall,” Rampanen explains to the youth watching her. She goes on to explain that they are at their largest just before hibernation. That way they can utilize the meat for meals and also have large piece of hide to work with.

Kalilah and her brother, Nikosis Rampanen, were displaying to the youth crowd how to stretch out the bear hide. Using a small hunting knife, Kalilah pierced a hole small enough to string a small rope through, and Nikosis was following behind her stringing and wrapping the rope around the alder wood frame.

Kalilah and Nikosis then spent about 25 minutes going around the whole frame, tightening the string of the bear hide to take out the slack and make it taut.

With the bear hide now tightly stretched, the siblings lifted the frame and rested it against a nearby table with the fat and hide facing outwards. Nikosis left his sister to help with the skinning of a racoon, leaving Kalilah to finish up the hide.

Using the same knife she had used to pierce holes in the hide, she began to carefully cut away the fat. It was a tedious process; Rampanen had to make sure she wasn’t cutting or damaging the hide, so she would have to cut the fat off in small pieces at a time.

Traditionally, a knife made out of moose bone was used for this process. While Rampanen had brought one for display, it was just a whole bone, and was not shaped into a knife. Rampanen would have cleaned the bone of flesh, and cut the shaft of the bone on an angle. That end of the bone would then be used to cut and scrape off the fat.

“Keeping the fat is really important too,” Rampanen says as she puts the fat onto the table, “It’s an important factor of cooking.”

Once all the fat was taken off of the hide, the skin is normally soaked in a soap bath for a couple of hours to take off all of the left behind oil and grease. When it is deemed ready, Rampanen would make a tea out of hemlock bark that she would use to tan the hide, and it would soak in that broth for upwards of two weeks to cure and tan it. One bear hide could use one tree’s worth of bark.

The task of preparing and tanning hide was traditionally a job for women. Once the hide was completed, it would be made most commonly into clothes or moccasins.

“I’ll probably just keep it as a full robe for now,” Rampanen says when Ha-shilth-sa asked her what she was going to do with her hide. After taking the hide off of the frame, Rampanen cured it and left it as is until she got an idea of what to make of it. 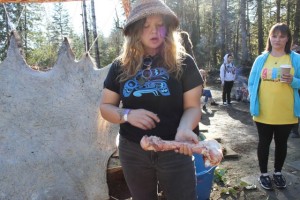