The Huu-ay-aht First Nations (HFN) and Western Forest Products (WFP) have entered into an historic, mutually beneficial partnership made possible through provisions of the Maa-nulth Treaty.

Huumiis (means cedar in Nuu-chah-nulth language) Ventures Limited Partnership (HVLP) has been formed between Huu-ay-aht First Nations and WFP. The new venture aims to provide jobs for HFN members as well as stability for WFP customers and employees.

Perhaps an even greater benefit is that it gives co-management powers to HFN over the lands contained in the deal.

According to Elected Chief Robert Dennis, the agreement is a complex one that has its beginnings in HFN’s Kwispaa project, which was shelved when Steelhead LNG ceased work on the venture this year.

But WFP wasn’t interested in selling their Sarita Dryland Sort to HFN.

“We weren’t bringing anything to the table other than saying we wanted to buy the land,” said Dennis, adding that relocating the dryland sort was expensive and time consuming for WFP.

But then the Maa-nulth Treaty came into effect in April 2011, giving Huu-ay-aht treaty settlement lands that they could offer up. According to Dennis, WFP was willing to sell the Sarita Dryland Sort land as long as they could reach an agreement allowing them access to wood on HFN treaty lands.

Western CEO Don Demens recalled a time when the company’s AAC (Annual Allowable Cut) declined due to land-use decisions. The new agreement allows the company to increase their land base through this collaboration with HFN.

According to Demens, the new partnership permits HFN to be involved in the sustainable management of TFL 44, secured in the Reconciliation Protocol the two parties signed in 2018, and is based on trust and mutual benefits.

While the LNG project did not succeed, Dennis said that other opportunities arose.

“I’m not ashamed to say that my oldest son Wis^qii was against the LNG project but he said, ‘If you guys would somehow get some of our lands back, I’d be willing to look at that’,” Dennis said.

HFN leadership sent their lawyer to negotiate with WFP to see about a deal that would get some of their territory back. Through these discussions a protocol agreement was struck.

The two parties identified their interests in accordance with the protocol agreement and this HVLP deal, with its seven per cent interest acquired from WFP, is the first one on the table.

HFN has paid in full for the deal.

“What this means to ƛiišin (HFN Hereditary Chief Derek Peters) is that he is able to get more of his hahulthi (lands & resources),” Dennis said.

In a post-treaty world, ƛiišin has reclaimed control or shared interest in 45 percent of his territory.

This new agreement is an example of lands ƛiišin has shared jurisdiction over, where prior to the signing of the agreement, he had none.

“It represents Tliishin’s hahulthi that is coming back to him,” said Dennis, adding that his end goal is to get 100 percent say over his land.

Dennis said that prior to contact, ƛiišin’s forefathers had sole authority over his lands.

“What we’re saying is we don’t have to control it all; what ƛiišin is saying is, as long as I can participate in the management of my hahulthi, then I’m satisfied,” said Dennis.

The celebration took place at Huu-ay-aht’s House of Gathering on Mar. 29, attended by industry executives and Nuu-chah-nulth leaders, with messages of support from political leaders.

Emcee Rob Botterell started off the celebration by welcoming the people and reading messages from the B.C. Premier John Horgan, who congratulated both parties on their venture; one he says will help grow local economies and represents a meaningful step toward reconciliation with First Nations.

Port Alberni Mayor Sharie Minions and MLA Doug Donaldson, B.C.’s minister of Forests, Lands and Natural Resource Operations, and Rural Development, both congratulated the parties. Donaldson noted that the collaborative venture will bring benefits to all and is a move that is part of their mandate of reconciliation with First Nations.

MP Gord Johns noted that the agreement is another step by HFN in asserting their sovereignty over their traditional territories.

“We pay tribute to our ancestors for helping us get to where we are today; we’ve come a long way, made strong partnerships and we’re proud of that,” said Robert Dennis.

“Respecting the Tyee is a paramount practise in our culture; we were raised to do whatever is necessary to hold our chief up,” he explained. “They (the Tyee) in turn, are diligent in taking care of their hahulthi (territories and resources) for future generations.”

Dennis talked about core principles that ƛiišin abides by; Iisaak (respect) and uuathluk (to take care of what is important to us).

“WFP recognizes this. What you take out, you put back in,” he said.

Dennis recalled a time when his people, whose homeland is surrounded by forest, had no access to timber and had to ask outsiders for it. Having a role in sustainable forestry management means HFN can ensure there will be cedar for future generations.

“Our ancestors wanted Sarita River to come back; for the salmon to come back – and this will allow us to do that work,” said Dennis. He noted that there are 35 damaged watersheds in Huu-ay-aht territory and they plan to ensure restoration work is done.

Demens called the agreement a milestone that will strengthen the forestry sector in the Alberni Valley, creating economic benefits for all. 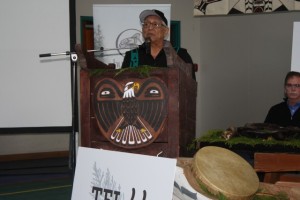 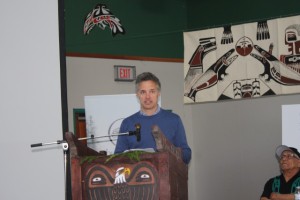 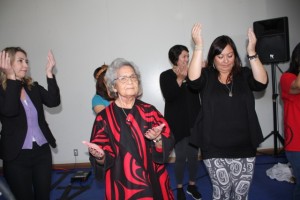