The Witness Blanket, which is now on permanent display at the Canadian Museum for Human Rights in Winnipeg, incorporates relics from the institutions and items owned by former students. (Jessica Sigurdson photos)

The Canadian Museum for Human Rights in Winnipeg made major headway recently, in signing a contract with artist and University of Victoria Audain professor, Carey Newman, around his piece the Witness Blanket.

The agreement marks new territory with Indigenous people everywhere, because CMHR has agreed to respect the traditions of Newman’s own nation by viewing his work as a living monument worthy of its own rights. The agreement moves beyond words, according to Newman, helping forge a relationship between himself, CMRH, and the Witness Blanket—an art piece containing a variety of objects taken from Indian residential schools and former students.

The Witness Blanket opened as an exhibit in 2014, and travelled around the country for a few years afterward. The piece is made of wood, and displays a multitude of items ­­­- hundreds, actually - related to Indian residential schools in Canada. Items on the piece include textiles created by students, pieces of churches, schools, government buildings, band offices and friendship centres, photos, hockey skates, moccasins, straps used to discipline children, and even braids. All of these items contain powerful memories, said Newman.

Some of them, Newman even has a personal connection to, like the braids.

“They’re my sisters’ hair. They cut their hair in honor of my father. He didn’t tell us very many stories, but that was one of them he told us,” he said. “He had his haircut on the first day of school.”

Newman and his team took 16 months in total, gathering items, going into communities to talk with people, and putting the Witness Blanket together.

The reason for the years of travelling after the Blanket was completed was that the would-be home for the piece -- the National Centre for Truth and Reconciliation in Winnipeg—needed an extra seven years before they could take it. Newman took his piece on the road, but after four and a half years realized the Blanket wouldn’t make it any longer.

It had spent six months at CMHR already, and Newman thought it might be a good place to leave it permanently. CMHR also had a good relationship with the TRC, so the match seemed more fitting.

The contract itself took over a year to draft up, and Newman said he was editing and rewriting even just a few days before the official signing. Last minute, he added a clause that recognized the contract as a “living thing,” which would be revisited and updated every few years, to ensure the needs of the Blanket were being met.

It’s this new way of thinking about an agreement that is making waves—though it’s not entirely new, said Newman.

“When I gave my remarks at the signing of this, I said that it might feel like we’re doing something new, but in fact we’re calling the spirit and intent of the original Treaties,” he said. “They started with a beautiful vision of sharing this land, but through neglect or intentional disregard, they’ve been dishonored.”

“We’re kind of following the way that our ancestors wanted it to be, way, way back when. Obviously, this is at a different scale. It’s not about land. It’s about memory,” continued Newman. “And those stories that are attached to that blanket.”

Heather Bidzinski, Head of Collections at CMHR, agrees with Newman, that this is a new way of approaching this kind of agreement. According to Bidzinski, it was a collaborative process along the way, even while drafting the agreement, and CMHR was happy to participate.

Bidzinski said one of the most challenging issues was not in understanding the concepts Newman was bringing forward, but in trying to put them down in writing. It was difficult—but satisfying—to merge oral traditions with the written word, she said.

“We talk about being a resting place or a home for the Blanket, because the agreement is not about acquisition or ownership. We talk about being the stewards of the Blanket and providing a respectful lodging place for it,” she said. “It’s a wonderful foundation for us to build upon in the future when we’re dealing with other agreements, and relationship building with community.” 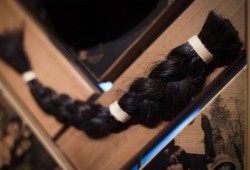 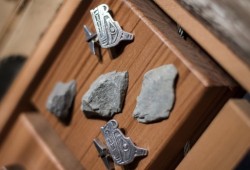 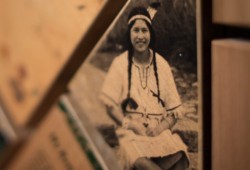