The House of Huu-ay-aht stands in Anacla's Upper Village, where lots for a subdivision are being constructed. This summer the First Nation plans bring six modular homes to the community. (Eric Plummer photo)

The Huu-ay-aht First Nations are taking steps to alleviate a significant housing shortage with the addition of six homes in Anacla this summer.

Though the Nuu-chah-nulth First Nation has about 850 members, the majority of them do not live in its main community of Anacla, which has approximately 100 residents. That’s because the community currently only has 44 houses. But several of those need plenty of upgrades.

“There’s about eight that are not in a good state,” said Kathy Waddell, Huu-ay-aht First Nations’ associate executive director.

Plus, a number of other current homes are overcrowded, with 10 or more people living in them.

The majority of homes are in Anacla’s Lower Village. Officials are keen to build up the community’s Upper Village.

“There are five houses there now,” Waddell said of the Upper Village. “The government administration building is also there. And there’s also a longhouse.”

Waddell said officials with the Huu-ay-aht First Nations have a long-term goal of having at least half of their members living at home by 2033.

In order to accomplish this, however, there will need to be plenty of other housing opportunities for these members to take advantage of. Waddell said work on a subdivision in the community has been ongoing. Those efforts, featuring 11 serviced lots, are almost complete now.

The Huu-ay-aht First Nations’ executive council had established an independent housing panel last year to determine needs. The objective of the panel was to review issues including Huu-ay-aht’s land use, housing and policies. Panel members were also asked to suggest changes so that Anacla could move toward its goal of becoming a more attractive place to live, especially for its members currently living away.

Council approved $2.3 million to be reallocated in its budget in April to build new houses in its community. The original plan was to build a six-plex. But following consultations with the public it was decided to head in another direction and buy six modular homes. Those homes are expected to be brought into the community by the end of July this year.

“We understand there’s a severe housing crisis and we need to get homes there as quickly as possible,” Waddell said.

These modular homes will be available to be leased.

“There are a couple of people who would be interested in them,” Waddell said.

Though the First Nation opted to buy a half dozen modular homes to speed up the process of having more housing available quickly, Waddell said plans to build a six-plex have not been abandoned.

“It’s not a dead deal if that looks like the best possibility for that land,” said Waddell, who is in her second year of being Huu-ay-aht associate executive director after having served 11 years as its director of community services.

But construction of a six-plex is also something that will not be happening immediately.

“It’s at least a year before we would get going on that, if that is the best use of land,” Waddell said.

Despite the modular homes which will soon be part of the community, Waddell said the Huu-ay-aht First Nations will still have a significant housing crisis.

“It’s still going to be a problem,” she said. “What we have now are houses that have fallen into serious disrepair. We have houses that are not fit for humans to be living there.”

Huu-ay-aht officials, however, are taking positive steps to correct this situation. Perhaps then more and more members who are living away from home will be eager to return.

“We’re trying to build community – having people there and services for them,” Waddell said. 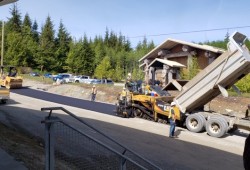 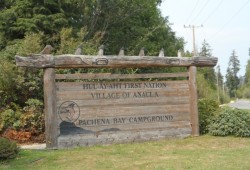