Local MLA Scott Fraser gives the thumbs up with a new group of graduates from a forest fire fighting course that recently wrapped up at North Island College in Port Alberni. (Deborah Potter photos)

After two back-to-back devastating fire seasons, the Province of B.C. is beginning to ante up in preparation for the 2019 season.

On May 24th, twelve students from Port Alberni received their Wildfire Crew Member Training certificates from North Island College, giving them the certification needed for entry-level positions as wildland firefighters.

North Island College offered the four-week program at both their Campbell River and Port Alberni campuses, and through funding from the Community Workforce Response Grant, were able to train 24 students, half at one campus, and half at the other. Natural resource management firm Strategic Natural Resource Consultants received a $126,000 grant from the CWRG to deliver wildfire suppression and safety, wildfire entrapment and avoidance, and wildfire crew member training.

“The best part was probably building a proper resume and cover letter,” says Kenneth Joe, one of the 12 Port Alberni students. They had spent a couple of days learning about proper resume building, creating their own personalized headers and best approaches to typing up cover letters for a professional look and a strong start to a career in wildland fire fighting.

The 2017 and 2018 fire seasons were some of the worst years in history, with a total of over 2.5 million hectares destroyed, and the B.C. province is taking steps to prevent further destruction. The 2019 budget made increases to include training programs like the Wildfire Crew Member Training at NIC, and to increase crew sizes, aerial capacity, and more innovative technology in preparation for the summer season.

There are 12 graduating students of the Wildfire Crew Member Training program in Port Alberni, but only 11 were at the ceremony, as one of the students had already left to join a wildfire crew.

“I consider this a ‘just in time’ program,” says Lynne MacFadgen, NIC’s regional director in continuing education and training, in reference to the wildfires already burning in northern Alberta. Even B.C. has suffered from over 150 forest fires under 0.009 hectares since April 1st.

The program in Port Alberni was led by Henry Grierson, wildfire management specialist with Strategic Natural Resource Consultants. Grierson began his career in wildfire fighting in 1979, and has been instructing courses similar to this at NIC for the last six years. Grierson had taught mostly forestry-related courses, such as NIC’s four-month Coastal Forest Resource certificate program, and this is the first time NIC had offered a course specific to wildfire fighting.

“Remember to keep your eyes open, and use what you have learned,” Grierson says to his graduating students, congratulating the newest batch of wildfire crew members. 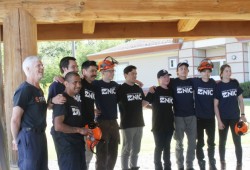