From one end of the camp to the other, there were information booths set up, event tables, and many activities at the Nuu-chah-nulth Youth Gathering June 7-9. (Deborah Potter photos)

Nuu-chah-nulth youth enjoyed a weekend away in the sunny bay of Nanoose, experiencing traditional culture, craft, and living from June 7-10.

Over 115 youth from different Nuu-chah-nulth tribes across the island came together at the Nanoose Campground for the annual Nuu-chah-nulth Youth Gathering. It was three days packed full of Nuu-chah-nulth teachings, fun events, and bonding.

“It’s important to learn our ku-us ways,” said Rampanen, while speaking of the cultural importance of living off of the land. He also expressed that each family had a special traditional role. From cedar weaving, to fishing, to berry picking, to cooking, each role is just as beneficial and important to the tribe as the next.

“Find your passion, grow with it,” he said to the youth.

Elders Willard Gallic and Patti Frank spent some time with the teens sharing new and old stories. They spoke about lessons learned, stories from their childhood, or recent stories about children and grandchildren, alongside Michael McCarthy, who was the MC for the weekend.

From one end of the camp to the other, there were information booths set up, event tables, and many activities.

Vancouver Island Health Authority had their own booth set up bringing awareness to the harms of smoking and vaping, with helpful tips for quitting.

There was an information table set up by Nitanis Desjarlais promoting the benefits of using natural food as medicine, which included samples of different plants found in our local forest that were steeped heavily in cool water. The ingredients were intended to promote healing, strength, and clarity, and included plants such as devil’s club, salmon berries, and ferns.

There were many special guests invited to share and teach, including Jeremy Speller, who held a basketball workshop, as well as John Rampanen, Pat Amos, Trevor Little, and the Snotty Nose Rez Kids.

There were smaller activities going on around the camp as well. Henna was offered to the youth, as well as beading and painting.

Geraldine Tom also held a workshop for youth who wanted to learn about cedar weaving and making regalia. There were handmade cedar roses and bracelets, as well as teddy bears with mini cedar regalia skirts, preparing the teens for a chance to make their own cedar regalia.

Tom had a separate workshop teaching the youth about the importance of natural medicine.

“This is sacred ku-us knowledge,” she told them, showing the easiest way to peel devil’s club while making sure every bit of the plant is used.

Snotty Nose Rez Kids made a surprise appearance on Saturday night. In between tour dates, they had stopped in to play a couple songs for the youth. The performance lasted just over an hour, but it was enough to get the kids dancing and screaming along with them.

While the weekend had many fun highlights, a lot of the activities and workshops had the underlying tones of the importance of culture, spirit, and respecting oneself, family, and friends.

“You’re all going to be leaders one day…be true to yourself,” Willard Gallic urged the teens at the end of sharing stories. 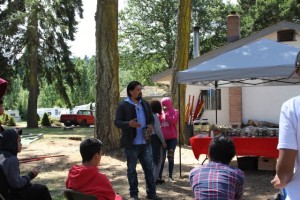 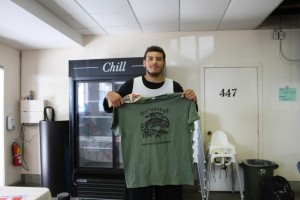 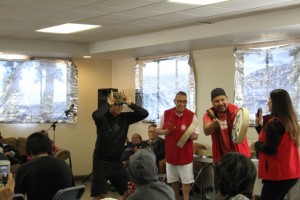