A fire tore through a residential home on Gallic Road at the Tseshaht reserve June 12, destroying the house and its contents. (Denise Titian photo)

A dramatic house fire tore through a residential home on Gallic Road at the Tseshaht reserve Wednesday afternoon, destroying the house and its contents. There were no injuries as the family was cooling down in the river on a day when temperatures were soaring in the mid-30s.

Port Alberni Fire Department Chief Mike Owens said they received a call at 4:09 p.m. while responding to two separate incidents. By 4:13 p.m. they were notified it was a structure fire and sent out a crew, paging the Sproat Lake Volunteer Fire Department (SLVFD) to assist.

“When we arrived on scene there was heavy smoke and fire coming from the rear of the house,” said Owens.

They discovered the fire hydrant closest to the burning home was inoperable. By that time SLVFD crews arrived and assisted in moving the hoses to another hydrant further down the road.

Once the hoses were connected the flames were quickly knocked down and fire crews rescued the family pets.

“We broke the window next to the front door to open the deadbolt,” said Owens.

Once the window was broken a cat jumped out. A terrified dog was also rescued and delivered to family members who showed up on scene as the fire was being put out.

Sharon Fred and her spouse, George Atleo, were both out at the time of the fire. George was at the gym while Sharon and the kids were swimming nearby at Papermill Dam.

Atleo said it was about 4 p.m. when a neighbor called to tell him that his house was on fire.

Fred said that her phone battery was almost dead so she left it in the car, oblivious to all the people that were franticly trying to call her.

A friend she was with went further down river to chat with someone. She came back in a panic with the news that Fred’s house was on fire.

“I heard the sirens but I didn’t know it was my house,” said Fred, adding that the fire was out by the time she and the kids got home.

“We are in shock; we barely had any sleep last night and we don’t know what the next steps are,” the couple told Ha-Shilth-Sa.

Tseshaht Emergency Services is helping the family by putting them up in a hotel room. They supplied a set of new clothes and meals for three days.

“The kids were swimming when this happened so they had nothing but their swimsuits,” said Tseshaht Emergency Services Coordinator Hugh Braker.

But Braker, who is out of town, said his nation has a very well-coordinated emergency preparedness program that was launched immediately.

“Our team contacted Emergency Management BC to get approvals in place to initiate emergency response resources,” said Braker. Along with food and accommodations for three days, the family was given toiletries and a set of clothes each.

“We don’t know whether or not the house can be repaired - the damage needs to be assessed - but either way, it’s going to take a long time,” said Braker.

Once the three days are up, Braker says the situation will be assessed and next steps determined. Tseshaht has reached out to the Canadian Red Cross for assistance.

“The community is rallying around us; First Nations Health Authority has offered support workers, people are organizing fundraisers and donations of new items are coming in,” said Braker. He went to say that he is really proud of his crew, noting that all of their training and practise has paid off.

Tseshaht support worker Gail Gus is assisting the family by coordinating donations and other resources.

It is believed that the family of five, plus their boarder, lost all of their belongings - but they cannot enter the house to check.

“They said we have to wait until an insurance adjuster goes in,” said Fred.

She is a ball player and is comforted by the actions of her teammates who are organizing fundraisers to support her family.

The Fred/Atleo family have three children and are in need of diapers and baby toiletries for their two year-old daughter.

There were two women living in the home. Both wear size large shirt, size medium pants and size 7.5 women’s shoes.

A crowdfunding page has been set up and donations are coming in at gf.me/u/tf3amz or people can donate directly by etransfer to tatesharon298@gmail.com or sandrajanetate@icloud.com. Cash donations and clothing or household items may be dropped off at the Tseshaht Administration Building at 5091 Tsumaas Drive.

The family thanks everyone for their generous support. 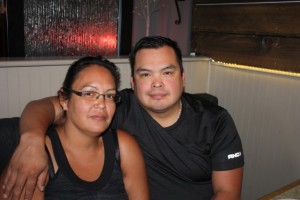 Sharon Fred and her spouse, George Atleo, were both out at the time of the fire