The First Nation rebuilt on the coastal site in 1969 after a previous settlement was destroyed in the 1700 tsunami. (Eric Plummer photos)

In 1969 it was evident that changes were happening in Huu-ay-aht territory. The Pacific Rim National Park Reserve was on its way to being established, stretching along the west coast of Vancouver Island, north and south of Barkley Sound.

Arthur Peters could see this development overtaking the shores of Pachena Bay and the Sarita River - an area the Huu-ay-aht had used for thousands of years - leading the hereditary chief to direct the First Nation to begin building a community in Anacla. When the first 11 houses were erected 50 years ago, Beachkeeper Pete Tatoosh was the site’s only permanent resident.

“We started with the four-plex and seven houses in the original loop when you first come in,” said Huu-ay-aht member Wišqii, Robert Dennis Jr., who moved back to Anacla in 2016. “It was done to let people know that we’re here. We had concerns, the West Coast Trail is right here.”

At the time a campground had already been established next to Anacla at Pachena Bay. Robert Dennis Sr. was among the village’s first residents.

“We operated a store here in Pachena,” said Dennis, who is currently the Huu-ay-aht’s chief councillor. “It was a coffee shop and gas bar, so I was the first manager.”

Anacla traditionally served as a summer village for the Huu-ay-aht, but a tsunami that struck the coasts of Vancouver Island and Japan on Jan. 26, 1700 devastated the settlement. The waves came in the darkness of night, when most of the village was asleep, said Wišqii.

“The ones that survived went up to high ground, but there were a lot of people that didn’t survive,” he recounted. “We always built right on the waterfront; our village would have been in the area where the campground is now. When that tsunami came in it destroyed everything: it broke the houses, it broke canoes, we lost food supplies.”

In 1969 many Huu-ay-aht members lived in Sarita, a site less exposed to the open ocean that traditionally served as a winter village location.

“There was even a hospital, like a health unit, in Sarita at the time,” said Huu-ay-aht member Hinatinyis, Brittany Johnson.

Members were encouraged to move to the new village, and now only four people remain at either sides of Sarita Bay, while Anacla has a population of approximately 120.

But this represents a small fraction of the First Nation’s nearly 750 members, the majority of whom live in cities outside of their ancestral territory. Dennis recalls that 95 per cent of Huu-ay-aht lived in the haḥuułi when Anacla was rebuilt in 1969.

“It’s the total opposite now, where most of our people are now living away from home,” he said. “In my lifetime I’ve seen a really huge contrast.”

Like many First Nations communities, housing is hard to come by in Anacla. And those who can live in the village face an 83-kilometre trip on a dirt and gravel road to get to the nearest hospital or grocery store in Port Alberni.

“It’s not just moving here, you have to be able to come and go from here as well,” said Hinatinyis. “There’s always a big desire to move home, but there isn’t anywhere for people to go yet. It’s tight, unless you can get in with family members and stay in their basement or something like that.”

The First Nation has set the goal of having half of its members move to Huu-ay-aht territory by 2033, backed by a housing and economic development plan to support this migration. This summer six modular units are expected to arrive near the House of Huu-ay-aht and the nation’s government office, located outside the flood plain on the other side of the Sarita River from where Anacla was rebuilt in 1969. The modular homes will be installed on an 11-lot subdivision with connections to the water and sewer system.

“This is the first phase,” said Martie Robertson, owner of Robie’s Contracting, as he was finishing these connections in late June.

Up to a dozen people worked on the new lots, most of whom were Huu-ay-aht.

“I think we had about seven or eight,” said Robertson of the First Nation’s members who worked on the project. “We got them onto the machines and pipelaying, general labouring. That was the whole idea, to introduce them to the underground business and heavy equipment.”

As part of its long-term plans, the nation aims to have another 50 lots built in the newer portion of Anacla.

The 400 or so permanent positions to run the multi-billion-dollar Kwiispaa LNG facility would have been a major component of this vision. But this changed when Steelhead LNG, the Huu-ay-aht’s partner in the venture, announced in February that it ceased work on the project.

Since then the First Nation has signed a business partnership with Western Forest Products to manage timber and provide jobs in its territory. And in recent years the Huu-ay-aht’s tourism potential has grown with the purchase of multiple properties in Bamfield and the introduction of tours to the ancient village site of Kiix̣in.

Since moving back to Anacla four years ago, the chief councillor has enjoyed the community’s existing economy. He gets clams and crabs from family members in the village, and fishes for salmon with his boat.

“I’m helping them and they’re helping me so that I can have food that I enjoy,” said Dennis. “If you have an economy that’s supporting each other, that’s a good thing. If you don’t have that, what else do you have? You’re supporting somebody else’s economy.” 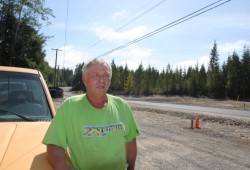