Tseshaht First Nation acquired a new canoe this spring, which is already being put to use by the Tseshaht Canoe Family on the Paddle to Lummi journey.

The three-week journey started in Port Alberni on July 4th, and is now underway, with stops in Tseshaht’s and other Nuu-chah-nulth nations’ traditional territories en route to the final destination of Lummi, Washington. There, they will join over 100 canoes from other nations for a five-day celebration.

A sea serpent, or Lightning Snake, design by Tseshaht artist Rocky (Willard) Gallic Jr. runs the length of the canoe. Lightning Snakes are allies of the Thunderbird, explained Ross, and they represent the first whalers.

“The story was,” said Gallic, in a conversation at a Port Alberni coffee shop, “when the Thunderbird went to pick up the whale in the ocean, it would have the Lightning Snakes in its wings, and it would shoot lightning bolts and stun the whale, and it would pick up [the whale] and take it to the mountain and devour it, eh. When the Thunderbird’s flapping his wings, and when he releases the Lightning Snakes, the lightning bolts would come out. [The Lightning Snake] shot bolts out of its mouth. That’s my understanding, from all the native art I looked at.”

“It looks really cool,” said Ross, of Gallic’s design in action on the ocean. “It looks as real as you can get, a heʔitliik gliding along the water.”

ʔinisʔahah, the new canoe, provides the means of healing and of the rebuilding of culture, language, and family by increasing accessibility within the Broken Group Islands for Tseshaht community members. The Broken Group Islands are the place of origin of the Tseshaht people, and connections to the archipelago are very strong for Tseshaht. The connections are not vague, or from the distant past. For thousands of years, Tseshaht people lived in the islands; only a generation or two separate that time from the present.

Access to these homelands is difficult for many Tseshaht who live in Port Alberni or even farther away. Boat transportation is required to reach the archipelago, and to visit the many Tseshaht ancestral villages and places of importance in the islands.

The new canoe will allow Tseshaht community members much more access to travel within their traditional territories.

Canoe access within the Broken Group Islands opens up many possibilities for Tseshaht First Nation. In addition to learning about cultural history and ancestral ties to the islands, people will be able to paddle to traditional sites of resource-gathering, for food such as fish, shellfish, and berries.

“There’s so many Tseshaht people learning the ocean, and paddling, history, and culture,” said Ross. “They’re in cultural school right now, on canoe journeys. Those people are in good training. I’m hoping that some of these people will lead the way for us, whether [through] culture, or tourism, or reconciliation, or healing.”

The canoe will be kept at Keith Island, an ancestral village and central location in the archipelago. ʔinisʔahah’s inaugural journey in the islands, said Ross, was from Keith to Ts’ishaa and back. Ts’ishaa, on Benson Island, is the birthplace of the Tseshaht people, a place of high importance which lies on an outer edge of the group of islands. It only took an hour to paddle the return trip, making it a very feasible destination for future trips.

The 36-foot fibreglass canoe is a similar size to a traditional canoe used for transportation, war, or hauling goods, said Ross. It has an optional sail and a retractable skeg, and was purchased with funding from the Canadian Coast Guard. The Coast Guard has been working in partnership with Tseshaht First Nation and other Nuu-chah-nulth nations to improve marine emergency response capacity in coastal First Nations’ territories. The Broken Group Islands, in Pacific Rim National Park Reserve, lie within Tseshaht First Nation’s traditional territories, and are a tourist destination for sea kayaking, sailing, and canoeing.

“We got both [a] Zodiac and the canoe from the Coast Guard,” stated Ross. “We’re very thankful that they understand our vision, [the direction] that we want to go, looking after visitors, looking after ourselves.”

“The main objective is to re-establish cultural connections to the area,” he said in a phone conversation. “Doing so by canoe is the best way.” 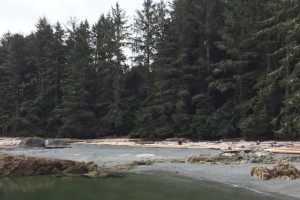 The beach in front of Ts’ishaa of the Broken Group Islands, the Tseshaht people’s place of origin. (Kelda Blackstone photo)