Roosevelt elk returned to the Henderson Lake area this year when 12 were transported from the northeast of Vancouver Island in February. (Bureau of Land Management/Wikimedia Commons photo)

What do you do when you have too many elk? You share them with the neighbors.

That is essentially what happened when 12 elk were translocated from the northeast side of Vancouver Island, where the populations are healthy, to the Henderson Lake area, where there are no elk.

The Uchucklesaht Tribe has signed an elk transfer protocol agreement with the province of British Columbia and members of the Wildlife Stewardship Council. The agreement will allow for the translocation to a remote area near Henderson Lake, where it is hoped they will thrive. In return, Uchucklesaht Tribe agreed to care for the transplanted herd made up of young males and pregnant females.

There will be no harvesting of this herd permitted until it reaches sustainable numbers.

“They are alive and well and we know where they are,” said Uchucklesaht Chief Councillor Charlie Cootes of the dozen Roosevelt elk released near Henderson Lake in February.

They are being monitored by Uchucklesaht members, provincial wildlife officers and various guide outfitters through game cameras set up in the area and in-person observation. The elk are not only being monitored for poaching but also for predation by wolves and other wildlife.

This is the second translocation of elk from the northeast end of the island into Nuu-chah-nulth territories in the past year. In 2018 a small herd of elk were translocated from the same area to Huu-ay-aht treaty settlement land.

According to Ron Frank, who for several years has been a forestry consultant for First Nations, Vancouver Island had an abundant Roosevelt elk population until the 1920s when the government allowed a commercial harvest, which devastated the elk herds. First Nations on the northeast of the island pushed for and achieved a say in wildlife management. Their model of managing wildlife has resulted in elk herds that are not only surviving, but thriving.

Uchucklesaht Chief Councillor Charlie Cootes said his nation historically hunted elk, but it hasn’t been possible in modern times with no elk left in Uchucklesaht territory.

But the Kwakiulth have cooperatively managed the elk herds in their territory and the numbers rebounded tremendously. John Henderson of the Wei Wai Kum First Nation in Campbell River says the conservation success is due to a partnership between First Nations, the provincial government, the Wildlife Stewardship Council and guide outfitters; all of whom have a shared responsibility for the wildlife.

In the North Island area the herd proliferated to the point that they have an overabundance of elk. Some of the elk are roaming into towns, wandering across highways, competing with agricultural interests. They end up being nuisance animals.

Rather than cull them, they are now being looked at as available animals which can be trapped and translocated to areas of the island that have no elk.

In order to obtain animals for translocation to Henderson Lake, traps are set. The live animals are then loaded into trailers and trucked to a barge. The truck and trailers are barged up the Alberni Inlet to Uchucklesaht Inlet.

In February there was still snow on the logging roads, so the trucks went as far as they could and released the elk in a remote area.

Uchucklesaht Tribe has committed to caring for the transplanted herd in accordance with the protocol agreement.

Ron Frank says there will be no elk hunting until it is determined that there is a viable breeding population in the herd. The elk protocol signed on July 17 speaks to the importance of taking care of the elk for future generations, says Frank. All Maa-nulth nations have wildlife harvest plans.

Uchucklesaht Ha’wilth Tom Rush told the crowd that he got to see video of the elk being released and was excited to see them look around then wander up the road in his territory. He thanked the Wildlife Stewardship Council.

Uchucklesaht thanked their neighbors from the east side of the island for giving them an opportunity to start a new elk herd around Henderson Lake.

They share a common boundary with Nuu-chah-nulth nations, he pointed out. 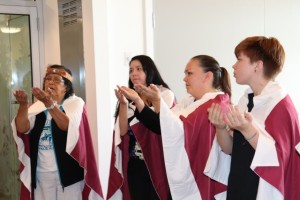 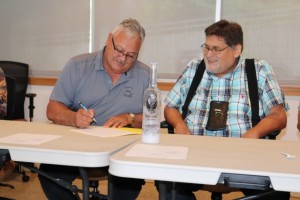 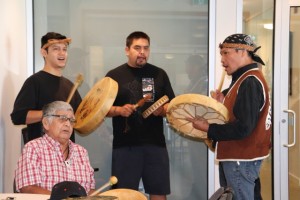