With an eye to resurgence, Tseshaht introduces new language house and program

Tseshaht First Nation is implementing an innovative language program that is the first of its kind for the nation.

The team is busy setting up the new language house on Tseshaht First Nation land at 7000 Pacific Rim Highway. In September, beginners’ language classes will resume on Tuesday evenings from 6:30 to 7:30 p.m. They will also host monthly gatherings for fluent Nuu-chah-nulth speakers, providing a space to speak the language, support each other, and learn from each other.

The language team is creating a long-term strategy for fluency. Other communities in the province as well as elsewhere in Canada can provide models for what successful programming looks like.

“There are things that are going on out there in the world that are working,” reflected Foxcroft. “So what does it look like for us and Tseshaht to create speakers, and what would work in our community?”

The Royal British Columbia Museum (RBCM) has a permanent exhibit in Victoria, Our Living Languages: First Peoples’ Voices in BC. Foxcroft recalls visiting the Victoria-based permanent exhibit with her university graduate class.

“It’s always great to promote and educate about Indigenous languages and to hold them up in any way possible,” she stated. “It was really powerful hearing family members’ voices, seeing your language, seeing the diversity.”

RBCM has now developed two travelling installments of the same exhibit, one of which is currently showing in the Alberni Valley Museum (AVM). The exhibit, which opened on National Indigenous Peoples Day and is a collaboration between RBCM and the First Peoples’ Cultural Council, will run until Oct. 5. It is a lead-up to a reconciliation exhibit initiated by School District 70, which will be presented at a later date. Between now and January, there will be many First Nations-focused exhibits, programs, and events, explained Shelley Harding, AVM education curator.

“It was just the norm to us,” she said, referring to the diversity of British Columbia’s First Nations languages.

Layla Charleson-Rorick, a Hesquiaht First Nation language learner, summarizes the intention behind work such as Tseshaht First Nation’s language program in a quote in the exhibit: “Although our languages are in a critical state, we choose not to see them as dying or about to fail. As long as people strengthen language through continued use and effort, there is really nothing that can stop its resurgence.” 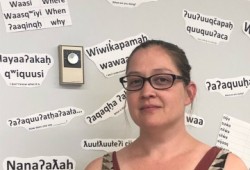