Less than a year after forest fires dominated the mountainside over Zeballos, the Ehattesaht/Chinehkint welcomed a surge of activity to the tiny community once again for the Northern Region Games.

The First Nation hosted the event July 19-22, bringing the games back for northern Nuu-chah-nulth nations for the first time in three years. With an emphasis on fostering connections in an informal environment, the games included 3-on-3 basketball, volleyball, a triathlon, traditional singing and dancing, as well as numerous other fun events.

“It’s always been about the youth and keeping our tribes together,” said organiser Annie John, who relied on several volunteers to pull the event together. “Everybody was an important part of it. I had so much help.”

The event was cancelled in 2017 due to closure of the Sugarloaf Bridge, a vital link that connects the Ehattesaht reserve to the Village of Zeballos. Then in mid-August last year a series of lightning storms sparked forest fires across northern Vancouver Island. For days crews were unable to contain a blaze on the mountainside over Zeballos, which filled the valley with thick smoke. Due to slope instability an evacuation order remained in place for a portion of the village until June 1.

“Last year we were supposed to host, but as you can see when you look out the door, the result of last summer is right there on the mountain,” said Ehattesaht member Lyle Billy as he addressed a packed Zeballos community hall for dinner on July 21. “We were besieged by forest fire that lasted for about five weeks.”

But this latest hosting of the Northern Region Games revealed the community’s ability to rebound from last year’s fires. By the third day of the event almost 150 people came to participate, a significant injection of visitors for the tiny community. Approximately 100 people live on the Ehattesaht reserve, with another 100 or so residing in Zeballos.

T-shirts for the 2019 event carried the Nuu-chah-nulth phrase ‘Tic-Kaa-Ii-Kwink’, which translates into ‘brothers of thunder’ in English. This was the original name for the Northern Region Games when it started in 2001 for the Ehattesaht, Nuchatlaht, Mowachaht/Muchalaht and Ka:'yu:'k't'h'/Che:k'tles7et'h' First Nations.

That year Ehattesaht was the first host for the games, offering a summertime event closer to home than the Port Alberni-based Tlu-piich Games. Travel south was becoming increasingly expensive and time consuming for families, recalled Billy.

“There was less and less of our people able to go down and attend those games,” he said. “That’s when the concept of the Northern Region Games came into play.”

The concept was initially brought up during a meeting by the late Mowachaht Ha’wilth Jerry Jack.

“I waited a year and no one made a move, so the next year at a northern region meeting in Mowachaht I put it on the table,” said Billy, adding that the emphasis was always to offer a social venue for family to reconnect. “We didn’t want it to be a competition. We just wanted it to be fun for the kids.”

That year the Ironman event was introduced, a run that includes a dash through the river that separates Zeballos from the Ehattesaht reserve. Billy said this was inspired by his youth, when his family were the reserve’s only inhabitants. Before the previous version of the Sugarloaf Bridge was constructed, the direct route to Zeballos’ former theatre was through the river.

“Sometimes we would walk to go watch a movie, so we’d have to cross the river,” said Billy.

As the event’s organiser, Annie John has been in high demand since preparations for this year’s games began in early May.

“I was stressed to the max,” she said on the last night of the games, relieved that the event was a success. “Tomorrow is the last half day and I kind of look forward to it - but at the same time don’t, because everybody is going to leave and Zeballos will be tiny little Zeballos again.” 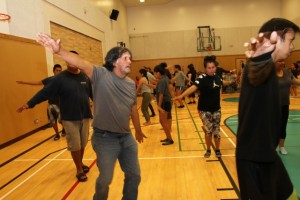 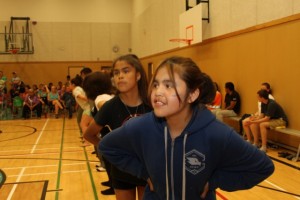 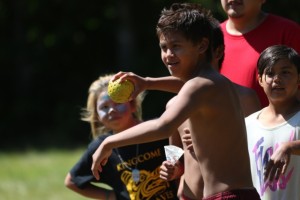 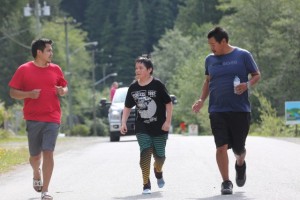