The 2019 BC Elders Gathering King and Queen Allan (Olie) and Edwina Henderson begin the procession into the venue at the Vancouver Convention Centre, accompanied by BC Premier John Horgan and other dignitaries. (Denise Titian photos)

More than 1,800 elders and their support people arrived at the Vancouver Convention Centre July 23 for two days of pampering, reconnection and fun at the 43rd Annual BC Elders Gathering (BCEG).

Hosted by the BC Elders Communication Center Society (BCECCS), the gathering drew hundreds of elders, many from remote First Nations villages to the hustle and bustle of big city Vancouver.

Elders, most dressed in brightly coloured regalia, began arriving at the VCC by 9 a.m., a full hour before the start of the grand entry. They passed time by visiting with one another or by drumming and singing.

Shortly after 10 a.m. the grand procession started with the Elder King and Queen accompanied by RCMP escorts dressed in Red Serge leading dignitaries, including BC Premier John Horgan, MP Jody Wilson-Raybould and others.

The 2019 BCEG King and Queen were Allan (Olie) and Edwina Henderson, who agreed to step back into the role two years after they were crowned in Campbell River. Organizers said that they were unable to crown a King and Queen from the Downtown Eastside community as originally planned and were grateful that the Hendersons returned into the roles.

The procession of elders wound down a long, wide hallway into the grand ballroom where more than 200 tables were set up for them.

Once they were seated at their assigned tables, Master of Ceremonies John Henderson, a counsellor for Wei Wai Kum Nation welcomed them. He acknowledged all of the organizers, sponsors, volunteers and host nations that made the event possible. Squamish Nation was prominent in welcoming the elders to their traditional territories. Tsleil-Waututh and Musqueam Nations were also acknowledged as hosts, having territories in the greater Vancouver area.

Chief Janice George welcomed the elders on behalf of Squamish Nation and got things off to a good start with a prayer.

Chief George talked about the importance of the cultural knowledge that the elders possess after the impacts of colonialism.

“We want to erase that interruption in our culture – and that is what you elders do,” she said.

MC Henderson talked about changes he has seen over years in his role as a politician. He urged the people to have a clear vision of what they want for future generations and to work to achieve those goals in a positive way.

“UNDRIP (United Nations Declaration on the Rights of Indigenous Peoples) gave us the tools to make the changes with governments,” said Henderson. He went to say that it is his hope that resources like wildlife and fisheries are managed in a way that will sustain future generations.

The premier announced that his government is working on legislation that will implement the United Nations Declaration on the Rights of Indigenous Peoples (UNDRIP) as a means to address reconciliation with the Aboriginal peoples of BC. If passed, the province will be the first province in Canada to endorse UNDRIP.

Premier Horgan was proud to announce that he is the first premier to appoint an elder advisor. Shirley Alphonse of T’Sou-ke Nation has been appointed First Elder to the Premier.

Melanie Mark is a Nisga’a woman and an elected MLA representing Vancouver/Mount Pleasant. She is the first Indigenous woman to serve in cabinet and was appointed by Premier Horgan to the Minister of Advanced Education, Skills and Training post.

She told the crowd that when she looks at the elders she sees resilience. “Our grandparents had to fight for our rights and for that, I am so proud,” she told them. “My two daughters have a better future because you fought for their rights and I am going to continue to fight for your grandchildren’s rights.”

She told them to encourage their grandchildren to get to the finish line in terms of education and reminded them that it is never too late to go back to school.

Keynote speaker Jody Wilson-Raybould took to the podium to a long chorus of cheers and applause. She talked about her family and community and how they instilled values and cultural teachings. The theme of this year’s BCEG was ‘All My Relations’ – a term used by many First Nations people.

Wilson-Raybould is an Independent Member of Parliament for the riding of Vancouver Granville. Prior to that she was a member of Prime Minister Justin Trudeau’s Liberal Party and was appointed Minister of Justice and Attorney General – the first Indigenous person to hold that office. But conflict with the PM saw her removed from that seat to be minister of Veteran’s Affairs. Many perceived the move as a demotion.

Eventually, Wilson-Raybould was removed from office and from the Liberal Party of Canada. On May 27 Wilson-Raybould announced she would run in the next federal election as an independent. Recent polls in her riding of Vancouver Granville have her leading in popular support, according to McLean’s magazine.

She said it was her family, her community - ­­­­ all her relations - which sustained her in the days following what happened in Ottawa. She credits the value of honesty, of speaking her truth, which appeals to Canadians.

“I received 15,000 letters of support and encouragement,” she said, simply by approaching her job with the teachings of her people.

She is dissatisfied with Canada’s approach to reconciliation, noting that the federal government has fallen back to limited and incremental changes when it comes to UNDRIP.

“I remain incredibly optimistic about our futures because building Indigenous nations ensures a stronger and better Canada,” she told the crowd.

Following speeches the people were served lunch in the large ballroom that was used for main events. The ever popular vendor’s room was just down the hall where people could shop for custom made clothing, jewelry, medicines, arts & crafts and more.

On the second floor venue rooms were set up for smaller groups to visit for self-care or to get health information. The Pamper Me centre offered hair, nails, foot checks, palm/card reading and more. There was a quiet area set aside for elders that needed a rest and there was a health screening centre where elders could visit nursing staff.

The evening events featured entertainment like comedian Howie Miller and the ever popular elder’s dance. One of the special guests said in her opening comments that she heard about the elder’s dances and she also heard the saying, “What happens at the elders conference stays at the elders’ conference!” 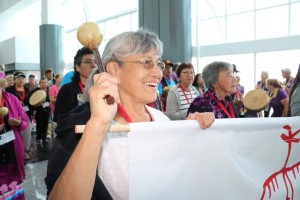 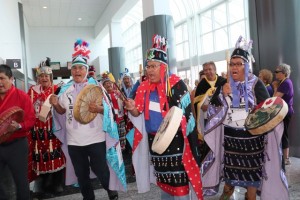 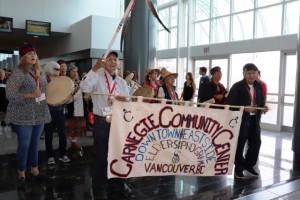 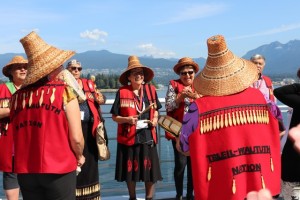 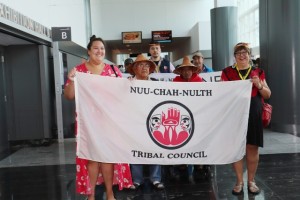 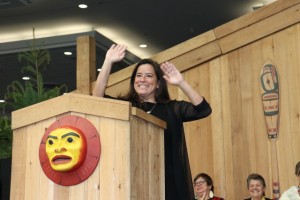