Rock debris has caused Highway 4 to be closed this morning, after another unexpected closure on July 9 (pictured). (B.C. Ministry of Transportation and Infrastructure photo)

Travellers headed to Tofino and Ucluelet have again been forced to change their plans, due to the second unexpected closure of Highway 4 this month caused by rock debris.

The only road to the Vancouver Island west coast communities has been closed since early this morning, and is not expected to reopen until 12:30 p.m. at the earliest, according to the latest update from DriveBC. Rock debris blocked the highway 14 kilometres east of the southern boundary to the Pacific Rim National Park Reserve – the same location where early morning blasting caused a boulder to hold up the road until 4 p.m. on July 9.

“The crew is working as quickly as possible to reopen Highway 4 to traffic. The estimated time of opening is between 12:30 to 1 p.m. today,” stated the Ministry of Transportation and Infrastructure in an email to Ha-Shilth-Sa. “The ministry apologizes for any inconvenience caused by the extended closure.”

The 1.6-kilometre stretch of highway over Kennedy Lake is undergoing extensive construction, where cliff-side blasting and excavation is being conducted daily during scheduled road closures. This week closures are planned from 1-4 a.m., 5-7 a.m. and 10 p.m.-midnight.

“Rock blasting and major earthworks are only conducted during the scheduled nighttime closure times and pre-scheduled road closures were in effect; however, the closure beyond 7 a.m. was unexpected and was the result of a routine blast, where more rock debris came down than expected,” said the ministry. “We understand the frustration and inconvenience caused by these closures, given that Highway 4 is the only route in and out from the communities of Tofino and Ucluelet. “

Irine Polyzogopoulos was headed west from Port Alberni to work in Tofino shortly after the highway was scheduled to reopen, when she was stopped by a flagger at 7:35 a.m., approximately 15 kilometres west of Sproat Lake Landing. At that time the road wasn’t expected to reopen until at least 10:30 a.m.

“The flagger was giving me a warning that the highway was closed,” said Polyzogopoulos, who decided to turn around based on the flagger’s description of the incident. “Based on the fact that the rock that was blocking the highway was larger than the last time - and the last time didn’t clear until 4 p.m. - she wasn’t hopeful that the 10:30 a.m. reopening would actually occur.”

Much of the route to the west coast doesn’t have cell phone or internet connections. Fortunately, this warning from the flagger came near a rest stop with bathrooms, Wi-Fi and cell reception, where Polyzogopoulos was able to notify contacts in Tofino of the travel delay. Along with other motorists, she headed back to Dellas Café at Sproat Lake Landing to wait the closure out.

“There’s been tourists coming in and out and playing the same game here, using the Wi-Fi and looking on DriveBC for updates,” she said. “There was a guy with a canoe and kayak strapped to the top of his car.”

The ongoing highway work is part of a $38.1-million project funded by the provincial and federal governments to make the winding stretch of road along Kennedy Lake safer. The project includes widening each of the two lanes to 3.6 metres, while adding a 1.5-metre paved shoulder to either side. A concrete barrier is also planned to prevent vehicles from falling down the cliff into the lake. In 2010 two paramedics lost their lives when their ambulance drove off this cliff, falling 33 metres into Kennedy Lake below.

The Highway 4 project is expected to be completed by next summer. 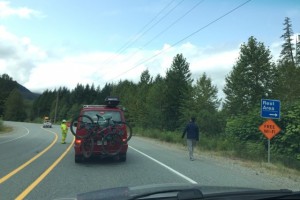