While local First Nations lent their approval to Port Alberni’s new wastewater treatment system in the Somass estuary, Tseshaht First Nation still has misgivings about an outfall pipe to be installed this winter.

Upgrades to the city’s wastewater treatment are designed with higher environmental standards in mind, yet Tseshaht had hoped for more reassurance from provincial and federal authorities about the outfall design and its potential impact on fish and fishing.

The City of Port Alberni’s $17-million construction contract with Tritech Group — representing one of the largest infrastructure projects in the city’s history — is one component of an estimated $32-million investment, including a federal contribution of $18 million.

As construction proceeds in the estuary, DFO is reviewing the city’s application for temporary and permanent impacts to estuarine habitats.

Built in the 1950s, the existing wastewater system falls far short of regulatory standards that have evolved since the 1980s. Heavy storm water discharge can at times overload the system, sending overflow straight into the river.

“What we’re doing is upgrading the lagoon from Catalyst, adding some features that will suit regulatory compliance,” said Wilf Taekema, the city’s director of engineering and public works. “Part of that is the addition of the outfall. Currently the effluent exiting the city lagoon is going into the river channel.”

The city bought the disused pulp mill lagoon in 2012 for $5.75 million, seizing an opportunity to save money while modernizing wastewater treatment to meet provincial standards and federal regulations enacted that year. Dredging and reclamation of the old industrial pond began in 2016.

Taekema described the project as a significant improvement in technology, adding mechanical screening, aeration and ultra-violet disinfection of effluent to the system. The new lagoon is roughly four times the area of the existing one, large enough to accommodate city growth for a projected 40 to 50 years.

Kelsey Pipelines has been contracted to lay a 32-inch pipe, a buried outfall that will extend 800 metres into the harbour to a depth of 10 metres at low tide. Five diffusers at the end of the pipe are designed to aid dispersal and dilution of effluent in the inlet. Construction is timed to coincide with “fisheries windows” to minimize impacts on salmon migration in winter and summer.

After the existing lagoon is decommissioned in 2019-2020, 4.9-hectares of land will be returned to estuarine habitat. As well, the city plans to twin its wastewater system over the long term, separating sewer from storm water lines to better manage effluent, said Tim Pley, chief administrative officer for Port Alberni.

From the city’s perspective, Pley acknowledges the project has been a complex one, all factors considered.

“We’re discharging into a really sensitive, highly important salmon river,” he said. “All of these things combine to make it a really challenging project.”

Somass estuary — transformed over time through industrial and urban activity — remains a sensitive area, not only from an ecological standpoint but for its cultural, historic and political significance. Whole villages were uprooted. Only about 30 percent of the original estuary — habitat critical to salmon and especially juveniles in their readiness for ocean survival — remains intact.

“There is a long history of Tseshaht being displaced,” said Darrel Ross Sr., Tseshaht research and planning associate. “Not just village displacement, but also from our ability to harvest food.”

Tseshaht and Hupacasath First Nations have been involved as stakeholders throughout project planning, involvement that brought a design reconfiguration to their attention. An outfall that would have extended 1.5 kilometres into the inlet was rejected after technical study determined deep-water discharge would hinder rather than help effluent dispersal. Instead, a realigned outfall would discharge in shallow water at the river mouth.

“The provincial government was not able to give assurances to Tseshaht that this new alignment is safe for fish,” said Darren Mead-Miller, executive director, Tseshaht First Nation.

One regulator favoured deep-water discharge, the other favoured a shallower discharge, Pley explained. To reconcile, the city chose the shallow alignment while adding ultra-violet treatment to safeguard human health.

Responding to concerns raised by the fishing community, the city at one stage hit the pause button, putting the project in hiatus and collapsing its tender while they revisited the science at the stakeholders’ table, Pley said. He had the impression Tseshaht was satisfied with the outcome and he was impressed that their leadership was able to arrive at a “yes.”

Tseshaht supports the project as a vast improvement on the status quo while wondering if fish health is being compromised for the sake of cost savings. Would a longer outfall, one discharging beyond Polly Point, be better for fish and fishing?

“The new outfall is still in an area heavily used, especially for chinook fishing,” Mead-Miller said, noting that spring salmon will hold in the estuary before swimming upriver to spawning grounds.

The river channel is narrow and shallow. There can be as many as 150 gillnets in the water during peak chinook season along that stretch, Ross noted.

“Although it’s a huge improvement over what exists, the question remains, is there a better way? From a fish safety perspective, Tseshaht has not been convinced,” Mead-Miller said.

With so many Pacific salmon stocks depressed, including those of the Somass in recent years, they ask whether an opportunity for further habitat improvement is being overlooked.

“They may not be related (to wastewater effluent), but where we can mitigate and reduce the risk, we should,” Mead-Miller said.

In its review, DFO is considering offsetting measures — specifically the creation of salt marsh habitat — to support rearing and foraging for juvenile salmon. Before authorizing the outfall construction, the department may set conditions to offset or mitigate impacts on fish. As well, DFO says it will monitor the project to ensure compliance. 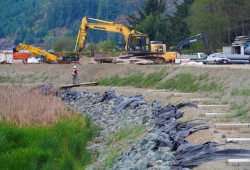 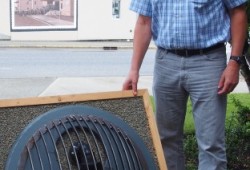