Earrings and red dress pins made for the Lil' Red Dress Project are available for sale. Carla Voyageur and Jeannine Lindsay have raised $10,000 through the project that will go towards signage for missing Indigenous women and girls. (Karly Blats photos)

What started as a conversation around a kitchen table between friends, has evolved into a successful advocacy campaign for Missing and Murdered Indigenous Women and Girls.

In just one year, friends Carla Voyageur and Jeannine  Lindsay have raised $10,000 through their Lil’ Red Dress Project that will go towards the costs of creating and installing missing person signage on Vancouver Island.

Lindsay, Voyageur and some of the team’s volunteers were at the Teechuktl Mental Health office on Friday, Aug. 30 conducting a workshop for Nuu-chah-nulth members, showing them how to make their own beaded “little red dress” pins.

Voyageur said motivation for the Lil’ Red Dress Project stemmed from the belief that many Indigenous families would not be able to afford expensive billboards for a missing family member.

“There was some extensive signage in the Comox Valley where we live. There was a non-Indigenous woman who had been missing for 25 years and the family put out all these billboards everywhere, there was at least a dozen of them in the Valley,” Voyageur said. “We felt empathetic that this young woman was missing but it really kind of hit home to us that no Indigenous family we know could put up that much signage, never mind one sign.”

Voyageur said her and Lindsay both enjoy beading and decided to create the little red dress pins. They posted them on social media and they quickly gained a lot of attention.

“Within two days we ended up having to make a Facebook page because we were getting massive orders…it kind of just took off from there.” Voyageur said. “The money that we’re using from the sales are all going towards signage. So we’re going to create missing persons signage to be displayed on Vancouver Island and they’ll feature Indigenous women from the Island.

Red dresses are intended to be a visual reminder of the more than 1,000 missing and murdered Indigenous women and girls in Canada, whose cases remain unsolved.

Lindsay said the team of volunteers have been doing various workshops around the Island to spread awareness about the campaign and to teach others how to make the beaded red dresses. She added that they have been approached by educators with the idea of having the beaded dresses and awareness about MMIWG be part of school curriculum.

“We’ve been asked by many different teachers and groups who want to bring this project to schools. After we finish our billboard we’re going to be looking at that,” Lindsay said.

The team is working with Nanoose First Nation to have their first billboard set up at the new gas station along Highway 19A.

“It’s pretty amazing to think that this all just started around a kitchen table conversation about the fact that we know many of our Indigenous families are marginalized, they wouldn’t be able to afford to put a billboard up,” Lindsay said. “It’s been a learning curve for us, we had no idea how much time and effort would go into doing billboards and doing them properly. We feel that once the first one’s up it will be a domino effect from there.”

Lisa Watts, MMIWG family support worker with the Nuu-chah-nulth Tribal Council, said she was really inspired and impressed with the Lil’ Red Dress Project and wanted to bring the team to Port Alberni for Nuu-chah-nulth members to learn from.

“I have been working with families that have been affected by [MMIWG] so when I saw what the ladies are doing and how far they’ve come…I said we need to do something about this. It really touched my heart,” Watts said. “They put their love into something that’s really worthwhile. It’s true there’s not enough signage anywhere for an Indigenous woman or girl or man and rather than talk about it or complain they did something.”

Watts plans to go to other Nuu-chah-nulth communities on the Island and bring the Lil’ Red Dress Project team to present their workshop.

To order a Lil’ Red Dress pin or earrings, or to learn more about the project, visit lilreddressproject.ca or visit them on Facebook at www.facebook.com/lilreddress/. 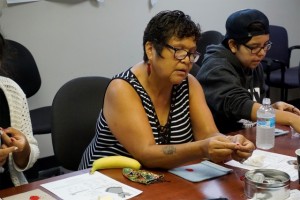 Cindy Keitlah learns to make a red dress pin from volunteers with the Lil' Red Dress Project on Aug. 30 at the Teechuktl Mental Health office in Port Alberni. 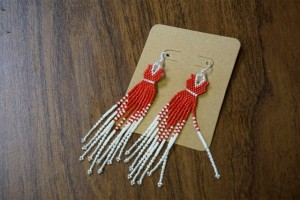