A helicopter returns after transporting salmon above rapids at the Big Bar landslide near Lillooet. (DFO photos)

Salmon are swimming through the Big Bar Slide in steady numbers, a hopeful sign months after fish passage was blocked during migration to Interior spawning grounds.

The response operation’s “unified command centre” reported modest but steady progress over the last week of August at the canyon slide site despite naturally fluctuating river levels, another hurdle in a race against time.

By Aug. 29, fish counts showed more than 12,700 salmon were able to swim through the slide area along a cleared passageway. Those were in addition to roughly 50,000 salmon sockeye, chinook, coho and pink airlifted by helicopter or trucked around the slide since beach seining began in late July.

The latest figures are dwarfed by forecast spawning escapement. More than two million migrating salmon, including 628,000 sockeye — far below the pre-season forecast of 4.8 million — and well over a million pink, chinook, coho and chum, were expected to make their way upstream.

“This is understandably a crisis situation,” said Fisheries Minister Jonathan Wilkinson in a public update in late August. Fraser River returns were already predicted to be lower in this subdominant year, compounding the magnitude of the problem, he said.

The impasse, a five-metre-high waterfall over slide debris, was first reported June 23. After criticism from First Nation leaders, locally and at large, for not responding with appropriate urgency, federal and provincial authorities have tried to show otherwise.

About 100 staff are based at a command centre in Lillooet, co-ordinating the effort now referred to as Unified Command of the Big Bar Landslide, “a government to government to government response.” Another 58 staff are working at the site in addition to 16 rock scalers, the people who normally work above highways to reduce slide risk. First Nations are now working shoulder-to-shoulder with federal and provincial staff.

This is not the first time a rock slide has blocked the province’s most vital salmon waterway. There are echoes of the disastrous winter of 1914, when CN Railway blasting triggered the Hells Gate Slide. Water velocity through the gorge increased enough to prevent most salmon from swimming upstream. Indigenous alarm turned to outrage, fuelled by government mishandling of the response. River restoration efforts from the outset were ineffective while Indigenous knowledge and advice were ignored.

As a direct consequence, Indigenous communities along the river suffered years of famine. Downstream, a massive commercial fishery carried on. Predictably, the Fraser salmon population plummeted to a fraction of its original strength. Indigenous fishing rights were severely curtailed. Stocks began to recover only after fish ladders were built decades later.

“Immediate mitigation efforts, in consultation with impacted Fraser River First Nations, must be the top priority for the Department of Fisheries and Oceans and associated provincial ministries,” said Cheryl Casimer of the First Nations Summit executive. “The blockage not only impacts upstream First Nations’ access to food sources for this year, it has the potential to severely impair future cycles of salmon stocks which will be cause for huge losses to First Nations, commercial and sport fisheries in future years.”

Much of the frustration stemmed from the initial response, said NTC President Judith Sayers.

“I think it speaks to the overall management by DFO and the response to an emergency situation,” Sayers said. “It really wasn’t handled quickly enough.”

She feels there could have been more planning with First Nations from the outset. Nuu-chah-nulth peoples, too, have always fished Fraser-bound salmon.

“From a Nuu-chah-nulth perspective, it seems that we always have a difficult time getting DFO to respond and it seems we’re not the only ones,” Sayers said.

Jim Lane, NTC southern region biologist, suggested a lack of communication and consultation earlier may have been a contributing factor at the outset. There are other complicating factors.

“It’s a pretty remote area,” Lane said. “It took a while, but you can’t have people charge in because it’s unsafe. For me, I think they’re doing just about everything they possibly can. Yes, it probably won’t be enough.”

He feels confident that an engineering solution will be found. If nothing else, the situation may help to bring greater attention to broader challenges facing Pacific salmon, he added.

The Big Bar response has included testing of mobile fish ladders, though natural passage was recognized from the start as the most desirable outcome. Other strategies, such as dip-netting and truck transport, are being tested or expanded while road construction around the impasse nears completion.

During the last week of August when the first fish came through the passageway it was more than symbolic, exhibiting the resilience and power of an animal long held sacred by First Nations.

“Our fish are pretty resilient,” Sayers said. “We just need more to get through. A few is not enough. Or four years down the line, there won’t be many salmon returning.” 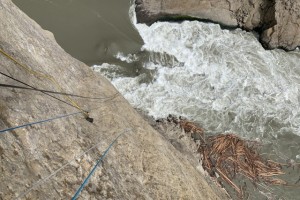 A rock scaler’s view looking down at Big Bar slide. 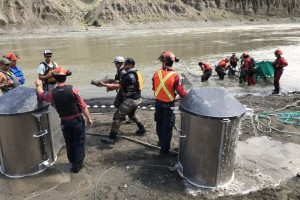