Partnered with the Going M.I.L.E.S program, the Mowachaht/Muchalaht organized the first youth gathering just for the northern Nuu-chah-nulth nations from Aug. 31 to Sept. 3. (Deborah Potter photos)

At the base of the many massive west coast mountains, in the traditional lands of the Mowachaht/Muchalaht First Nations, around 25 tents were set up in the fields behind the band office for the very first annual Northern Region Youth Gathering.

The event was sponsored by the First Nations Health Authority, and THE Nuu-chah-nulth Tribal Council’s Teechuktl Mental Health staff had stepped up to help as well.

“A lot of Nuu-chah-nulth youth gatherings happen more south,” says Brian Lucas, one of the wellness workers with Teechuktl’s Quu’asa program. “A lot of (our) youth can’t make it that far.”

The last few Nuu-chah-nulth youth gatherings have been set in Nanoose and Nanaimo, which is at least a four-hour drive for the northern most nations.

For its first year, the NR Youth Gathering was able to provide almost everything for the youth attending. From meals to transportation, the only thing the youth needed was camping supplies. The event was open for youth 30 and under.

The four-day gathering had three days’ worth of workshops, promoting wellness, activity, suicide awareness, anti-bullying and the effects of drugs and alcohol. The key speakers of the workshops were Scott Ward and Dakota House, both Indigenous and recovered addicts who work with Going M.I.L.E.S (Motivate, Inspire, Lead, Empower, and Succeed), a leadership program that does interactive workshops for youth gatherings and conferences.

Ward and House captured the youth with fun anecdotes, an introduction to Ward’s skills in hypnotism, and magic tricks, and then followed with a swift delivery of the importance of wellness, anti-bullying, culture, and activity.

“We are all gifted, every one of you…it’s been passed down, from generation to generation.” House stressed to the youth.

House and Ward have travelled all over North America with Going M.I.L.E.S, from Nova Scotia all the way to New Mexico. The pair usually does about two to three conferences a month.

“The best part is probably seeing the kids have hope,” Ward told Ha-shilth-sa.

Each northern nation will take turns hosting the youth gathering, and while there is no date set, the second annual gathering is in the works, planned for 2020. 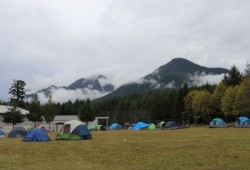 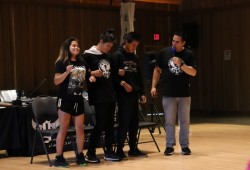 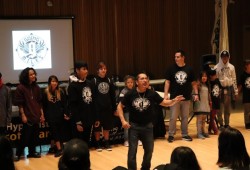