B.C.'s first First Nation to sell it legal: Cannabis could lead to other ventures for Tseshaht

The unveiling of Orange Bridge Cannabis this week marks the first business opened by the Tseshaht on the busy High 4 in a generation – an addition some hope will lead to future development on the corridor.

“This is the first time we’ve opened a business along this highway in over 30 years,” said Councillor Ken Watts at the store’s Tseshaht Market location. “That’s something that all of Tseshaht can be proud of.”

“I think edibles are going to be the No. 1 seller,” he said. “A lot of people are looking for that, simply because a lot of people cannot smoke it into their lungs.”

The shop is following strict provincial regulations on an industry that has just become legal. Currently just two of the six staff can actually work the cash register as the other employees await the completion of extensive background checks that the Liquor and Cannabis Control Branch required for certification.

“There’s two that can legally sell right now, the rest of us can still be in the store and work with clients,” said Kyle.

Five of the staff are members of the First Nation, and Les Sam managed the building’s renovation, while fellow Tseshaht member Willard “Rocky” Gallic Jr. designed the store’s logo.

Named after the connection over the Somass River that generations remember for its formerly orange colour, Gallic incorporated two fish into his design to represent the “life of the river”.

“This eagle on top represents a dear friend of mine that I lost many, many years ago,” explained Gallic to a crowd during the store’s formal opening. “He used to run along the railing…he used to run along and do a jackknife down there, and he flew like an eagle off that bridge.”

Tseshaht members voted in favour of proceeding with the cannabis store during a community meeting in late 2018, but some remain cautious about promoting a product that carries warnings from health authorities. Health Canada states that marijuana can be addictive, and impairs one’s ability to concentrate and react quickly.

“Stay away from the steering wheel,” warns the First Nations Health Authority. “Cannabis can impair your motor coordination, judgment and other skills needed to drive safely. It's safest to wait six to eight hours after using cannabis before driving or operating machinery.”

Long before recreational marijuana became legal in October 2018, doctors were permitted to subscribe cannabis for pain management. Interest in the health benefits of the drug continue to grow, and Naomi Nicholson, who runs Secluded Wellness and Chims Guesthouse near the Tseshaht Market, hopes to tap into this trend. She now offers lessons in making cannabis products, with massage to mitigate pain and discomfort.

Since recreational cannabis use became legal nearly a year ago, retail applications have flooded the provincial regulating body. A big player in the business is destined to be the Liquor and Cannabis Regulation Branch itself, which introduced its newest store on Sept. 11 at the Pacific Rim Shopping Centre - the same day the Tseshaht opened their shop at the other end of the Alberni Valley. The Port Alberni outlet follows the province’s showroom-style model introduced in other communities, with multiple signs and video displays educating customers on cannabis use and different strands. Tables in the new store even feature different buds in containers that customers can smell.

But some believe that placing these stores on the market – from the same regulatory body enforcing the rules - allows the province to have an unfair advantage over local businesses. The Cowichan Tribes have waited nine months for red tape to clear and allow them to open a cannabis shop in Duncan, but a provincial store is set to open in the same shopping mall. The nearly 4,800-member First Nation has requested that the province not open in this location, a concern echoed by the Tseshaht with the opening of another B.C. branch in Port Alberni.

Watts said that a letter was sent to Scott Fraser, minister of Indigenous Relations and Reconciliation, and Minster of Public Safety and Solicitor General Mike Farnworth.

“No response, I think it’s pretty frustrating,” said Watts. “I honestly think they shouldn’t have opened any provincial stores. In my opinion, I think they should be supporting local businesses first. It should never have been a part of policy or legislation.”

“The money that they invest in the store, why don’t they take that money and invest in licencing, so that they can get more turnover, get more licences out the door and more people certified?” he asked.

The next business venture for the Tseshaht could lie at the long-abandoned Sproat Elementary School, which closed in 2003. The First Nation is interested in developing the property, which it owns, although the site lies off of the Tseshaht reserve and would require rezoning approval from the Alberni Clayoquot Regional District.

“The current plans are for a mixed residential and commercial development,” said Watts. “People are tired of seeing the condemned school there, but we want to do things right and engage citizens properly.” 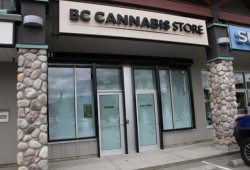