Wails of anguish pushed through a shroud of morning fog, Sept. 27, as returning Alberni Indian Residential School survivors, now elderly, let go of childhood scars, symbolically tossing them into a fire. Tseshaht First Nation issued an open invitation to all First Nations people in the province that were impacted by the legacy of Indian residential schools.

Many came from their homes in northern British Columbia.

The bridge crossing the Somass River that led to the site of the Alberni Indian Residential School was a familiar sign for the children, letting them know how close they were to that terrible place. It is a trigger for some, bringing anxiety, and pain. Back in the day it was painted orange.

It has since been painted grey and was draped in cedar boughs. According to Tseshaht spokesperson, Martin Watts, cedar boughs in the First Nation’s culture are used for protection. Those boughs, he said, are Tseshaht's way of saying we will protect you as you visit our homelands.

Hosted by Tseshaht First Nation, the doors of Maht Mahs gym opened Thursday, Sept. 26 for an informal open house. Maht Mahs gym is one of the last two buildings remaining from the AIRS complex; the other being an old classroom building that now houses some Nuu-chah-nulth Tribal Council office space.

In his invitation to the public, Tseshaht elder Willard Gallic told the people that AIRS was put on Tseshaht land without permission of his people.

Martin Watts welcomed the people and encouraged them to help release the souls of the little ones lost at AIRS so that their spirits could finally go home.

“The government needs to understand the damage and pain these places caused,” he said.

The Gitxsan people from northwest B.C. came prepared to do their healing work. Most dressed in beautiful regalia, took turns speaking, then carried out ceremonies to release the souls of their loved ones that didn't make it back home. Some let go of their pain and grief, sending gifts to the ancestors in the smoke of the fire.

“The kids were crying, so sad,” an elder from northern B.C. remembered. “All they wanted to do was go home but all they could do was cry.”

“Now we remember these children with love. Many went on to be sad, lonely people, but now we rise up,” he said to a chorus of cheers.

Refreshments and meals were served inside Maht Mahs. People could come inside and visit with old friends. Among the stations set up inside Maht Mahs, one held old photograph albums of scenes from AIRS, another with photographs of the AIRS children’s art exhibit that is on display in Ottawa. On the stage was a memorial table where survivors could place photographs, flowers and candle for their loved ones. 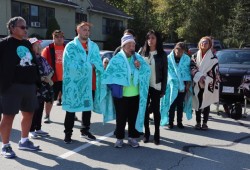 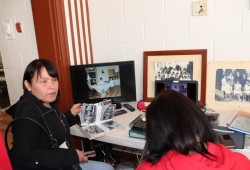 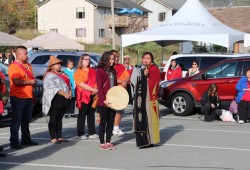 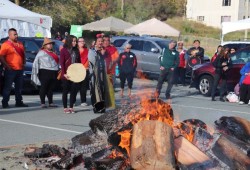 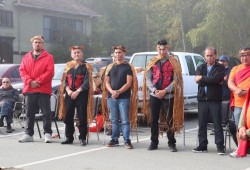