Despite the drastic overrepresentation of Indigenous people among Canada’s homeless, the Assembly of First Nations does not have a mandate to target the issue.

This was brought up during opening remarks at the Nuu-chah-nulth Tribal Council’s Annual General Meeting on Sept. 24, which was hosted by the Ahousaht First Nation. Ahousaht Chief Councillor Greg Louie spoke of a recent meeting Nuu-chah-nulth leaders had with Perry Bellegarde, the AFN’s national chief.

“Ahousaht posed the question to the national chief, what is your mandate, what is the national AFN doing about homelessness? What are you doing, Perry Bellgarde?” said Louie. “His answer to us is nothing.”

Point-in-time counts from Canada’s West Coast cities indicate that a large proportion of the homeless are First Nations. A count from March 15, 2018 in Victoria shows that one third of the 1,525 people without stable housing identified as Indigenous – with the largest portion coming from Nuu-chah-nulth nations. A count was performed in Nanaimo one month later, which identified 335 homeless, 31 per cent of whom identified as Aboriginal. That same year 147 homeless people were counted one night in Port Alberni, a rate that puts the city ahead of every community in B.C. except Terrace and Nelson, according to similar homeless counts in those municipalities.

“There are approximately close to 60 homeless Nuu-chah-nulth in Port Alberni,” said Stan Matthew, a counsellor with Teechuktl Mental Health, during the AGM.

The proportion of homeless people in Vancouver who identify as Indigenous is also alarming: Despite comprising just two per cent of the urban centre’s population, 39 per cent of the 2,223 people counted earlier this year were First Nations, Inuit or Métis.

During the recent AGM Fran Hunt-Jinnouchi, executive director of Aboriginal Coalition to End Homelessness, presented findings from her organization’s work in Victoria over the last four years.

“It is probably our most important work before us. Our people are dying,” she said. “We have learned that there are so many systemic and structural barriers in the city that it’s going to be really, really hard to penetrate without having political will behind us. We’re constantly being asked to fit into a square, even though we’re a circle.”

Ahousaht planned to hold the 2019 AGM in Victoria to highlight the issue, but hopes to hold the meeting at a downtown location had to be adjusted due to space limitations. The AGM ended up being hosted in Saanichton at the Tsawout First Nation.

“We wanted to have this session in downtown Victoria so we can all see the homeless people, our family and friends that are down there on the streets,” explained Louie. “But the venues that we checked out are a little too small and parking was terrible.”

While the issue was being discussed in Saanichton, Victoria’s Pandora Street continued to see a crowd of activity in front of a safe injection site and Our Place Society, which provides overnight shelter spaces and a variety of services for those experiencing homelessness. Ahousaht member Georgina Williams was performing her regular volunteer role at the site, serving coffee and sandwiches. It’s an involvement she’s happy to sustain after receiving help from Our Place her previous years on the streets.

“They’ve helped me out quite a bit. I used to prostitute and get into trouble,” said Georgina, who was first homeless when she moved to Victoria from Ahousaht nine years ago. “I feel loved. I feel like I’m welcome.”

Williams currently has her owned bachelor apartment, located a block away from where her son lives. But getting affordable subsidized accommodation came after a two-year struggle.

The Aboriginal Coalition to end Homelessness reports that incomes have not kept pace with Victoria’s rent increases over recent years, and the situation is worsened by a vacancy rate that remains at less than one per cent.

Income assistance has seen little changes as well; the shelter allowance of $375 a month is less than half the rent for a typical bachelor apartment in the city.

According to its point-in-time count, the Victoria Coalition to end Homelessness reports that most of the city’s 1,525 people found to be experiencing homelessness were either on income assistance or disability benefits. The top reason for housing loss was addiction, followed by job loss and being unable to afford rent. Fifteen per cent of the Indigenous people surveyed attended residential or an Indian day school, while almost half were in foster care.

NTC directors plan to hold a meeting to discuss homelessness on Nov. 19, with the intention of proposing a resolution at the Assembly of First Nations in December. 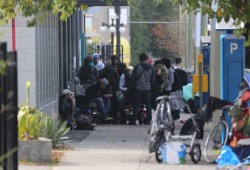