Shirley Jones stands at Our Place Society on Pandora Avenue, which provides services to many of Victoria's residents who struggle with homelessness. Nine years sober, Jones reflects on a past marked by addiction and homelessness, and how she was able to overcome the struggles faced by many First Nations people in the city. (Eric Plummer photos)

On Pandora Avenue in downtown Victoria a hive of activity fills the sidewalk in front of the safe drug injection site. Amid the random cluster of shopping carts, bicycles and tents, people franticly converse and exchange in what appears to be an outdoor market in a continual state of flux. At the end of the block a man is collapsed on the boulevard grass, his belongings strewn about. Down the other side of the street a stoic security guard stands nearby the sidewalk hustle.

Next to the safe injection site is Our Place Society, where Shirley Jones undertakes her daily custodial duties, while conversing and joking with the clients of the facility, whichoffers services to those who struggle with homelessness. It’s Sept. 24, and although Jones is celebrating her ninth year of sobriety, the issues faced by many on the streets of downtown Victoria are never far away. Now she speaks at events for Our Place, recounting her recovery from years of being in the grip of drug and alcohol addiction.

“It was horrible; it withered your body and wellbeing,” recalls Jones, a member of the Pacheedaht First Nation. “I woke up every day and I didn’t think about eating. ‘Where is my drink, how am I going to get it?’ Or before I went to sleep I would hide something so I had something when I opened my eyes.”

Like many on Victoria’s streets, the escalation of Jones’ habits led to her being without a home. She admits that everything she thought she would never do she resorted to, including panhandling and prostitution.

“I was sometimes in shelters, but mostly in doorways or bushes or bridges. Wherever everybody else was going I would be there,” says Jones. “I’d go and walk around all night, because if I didn’t, I probably wouldn’t have woken up. I would have frozen to death.”

An unwelcome world each morning

Our Place Society advocates for, supports and, if necessary, shelters Victoria’s most vulnerable. With shelters and transitional housing at multiple locations, this fall an additional shelter space was opened at the Pandora Street location, where mats are available seven days a week until the spring. It’s another measure to help a situation that many on the front lines are seeing worsen.

“The needs seemed to have intensified in the last while,” comments Holt Sivak, Our Place Society’s director of programs and services.

According to a point-in-time count conducted on March 15, 2018, the Greater Victoria Coalition to End Homelessness identifies at least 1,525 people in the Capital Region experiencing some form of homelessness. One third of these people identified as Indigenous, with the highest representation from Nuu-chah-nulth nations.

Elsewhere in the city the Victoria Native Friendship Centre has also seen the homeless situation become increasingly urgent. After operating a shelter for over a decade during the coldest and wettest nights of the winter, last year the friendship centre began offering overnight spaces seven days a week. On Oct. 1 the service resumed, with 25 beds in the facility’s gym until the end of March. Last year after the first three nights the shelter was full, with a waiting list through the winter.

“Over the course of the winter about 20 people stayed through the bulk of the winter,” says Executive Director Ron Rice. “What we were seeing was although there are a lot of efforts to adding units to the housing strategy in Victoria, that it wasn’t trickling down to help the homeless population.”

Despite the shelter’s efforts to create a sense of dignity and safety, its clients faced an unwelcome world each morning.

“Every day at 6 a.m. we would wake them up for breakfast and wish them good luck until 9 o’clock that night,” says Rice, noting that seven days a week the shelter’s clients were faced with where go during daytime hours. “Some of them have a routine, because they know they can’t sit anywhere too long before they get harassed. Some of them have quite an elaborate routine involving bank vestibules and shopping centres, libraries and city hall.”

Finding a place to stay during daylight can be particularly challenging for those with a mental illness, adds Tanya Clairmount, the friendship centre’s director of Human Resources and management support.

“Some people blend and they can be in spaces longer - but if you’ve been out there for a while, you’re starting to look dishevelled,” she says.

Never knowing who your friends are

The point-in-time count includes those who are sleeping outside, people staying in emergency shelters, individuals in transitional housing and coach surfing. Most rely on disability benefits or social assistance, while addiction or substance use is cited as the foremost reason for housing loss, followed by unemployment or just being unable to pay rent.

Sivak believes many of these people are not getting the mental health support they need to sustain housing.

“There’s a significant number of people on the street who are not receiving adequate mental health services - who don’t have access to detox beds or the supports they need to move away from the substances that are harming them,” he stresses. “So they wind up turning to substances, turning to alternate strategies to try and cope with their pain and their hurt and just function.”

Georgina Williams comes to Our Place every day, usually volunteering at the snack counter. The society has assisted the Ahousaht member secure her own bachelor apartment – but it took two years for Williams get a subsidized rental. Her continued involvement at Our Place has helped her to overcome past struggles.

“It keeps me from wanting to go back to my addiction with alcohol,” says Williams, who recently lost her sister, Wilma. “A lot of my family passed away and I’m trying not to go back there again.”

Williams first struggled with homelessness when she moved to Victoria from Ahousaht nine years ago. She recalls never knowing who her friends were while in the throes of alcoholism.

“My addiction was really bad for me,” says Williams. “Get drunk during the morning, pass out at lunchtime, wake up, start all over again. That was my routine for the day, and that was every day for two years.”

‘In the hands of the beast’

Statistics indicate that residential schools and the foster care system continue to be a factor among Victoria’s Indigenous homeless. According to the point-in-time count, 14.6 per cent of Aboriginal respondents attended a residential or Indian day school, while 46.2 per cent were under ministry care as a child.

Jones didn’t go to residential school, but her parents were raised in the federally mandated system. Her father attended the Alberni Indian Residential school, while her mother went to a Indian day school in Port Alberni. Learning more about her parents’ past has helped Jones understand the violence she grew up with at home.

“I know why they were doing this to me, because it wasn’t just my mother,” she reflects. “I didn’t go to residential school - I wasn’t in the hands of those people - but I was in the hands of the beast they created.”

Monica Williams, an Aboriginal housing support worker with Our Place, has found that the residential school system has left its impact on those in Victoria who struggle with homelessness.

“Residential school is huge factor in the trauma they’ve endured,” she says. “There’s a lot of intergenerational trauma, many of them are active in their addictions.”

Jones doesn’t remember going to residential school, but she hasn’t ruled out the possibility that she was a student.

“For some reason I think I was. There’s a darkness in my early school years that I don’t remember,” she says. “I remember Grade 2 up. There’s two years that are black.”

Housing is not the simple solution

On the second floor of the Pandora Avenue Our Place location Roberta Touchie sits by a window, as the beads she works on are illuminated by the early autumn sun. Sitting with her friend Evelyn Louie, it’s an activity the Yuułuʔiłʔatḥ First Nation member regularly engages in at the site.

“I do these little dress earrings, I do medallions and loom work. It makes me extra money,” comments Touchie, who was homeless for three and a half years before attaining subsidized housing in April.

She left Ucluelet after her father died in 1976, and has lived in Victoria ever since. She now does outreach work with the Aboriginal Coalition to End Homelessness. She advises that not all of Victoria’s homeless struggle with addictions.

“If you’re not secure in yourself, you can end up there too,” says Touchie. “But I’ve always been scared of drugs, so that’s kind of a lucky thing for me.”

Regardless of one’s personal challenges, a history of being on the street can bring barriers for a person looking for a home, she adds.

“I had good tenancy through my whole life,” Touchie says. “A lot of people are very judgemental; they don’t want to take you in if they know you’ve been on the streets.”

An increasingly competitive rental market hasn’t helped either. With a vacancy rate of 1.2 per cent, in 2018 the average bachelor apartment in Victoria was $926, an increase of $142 since 2016. Meanwhile the $375 shelter allowance potion of social assistance has gone unchanged in over a decade.

“Most of us are on assistance, and you don’t get enough,” says Touchie.

But full-time employment doesn’t necessarily bring in enough for housing in Victoria either, as shown by some of the regular clients who stayed at the friendship centre’s shelter last winter.

“There were two guests who worked full time, but couldn’t afford a place to live, and there were a disproportionate number of senior citizens,” says Rice. “For every person that’s here you could find a different path that got them there.”

“We do a disservice to people if all we provide is housing,” he says. “Particularly the more vulnerable people, they need personal, psychological and emotional support as well. Otherwise it becomes a cycle: sometimes they end up burning their bridges with landlords and end up on the street.”

For Shirley Jones, her path of addiction worsened after the deaths of her father and brother, culminating in suicidal ideas at Christmas 2009. But at that critical point she made what has proven to be one of the most important decisions of her life: she reached out for help.

“I had to keep running until nine years ago I decided I had to change my life,” she says, admitting that staying clean is still an everyday challenge. “I pray every morning before I come into work.”

Jones successfully fought for custody of her grandchildren, refusing to allow them to grow up in foster care. Despite her history of hardship, she believes that justice exists in the world. 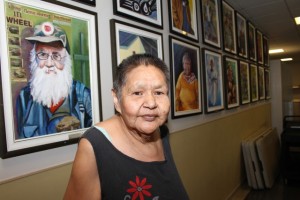 Georgina Williams comes to Our Place every day, usually volunteering at the snack counter. The society has assisted the Ahousaht member secure her own bachelor apartment, where she now lives a block away from her son. 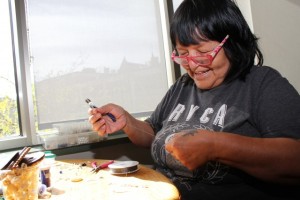 Roberta Touchie works with beads at Our Place, an activity the Yuułuʔiłʔatḥ First Nation member regularly engages in at the site. 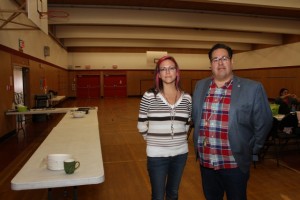 Tanya Clairmount and Ron Rice of the Victoria Native Friendship Centre stand in the facility's gymnasium, which serves as an overnight shelter over the fall and winter months. 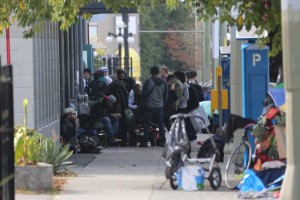