On Oct. 25 Christine Fred awoke to find a bear opening the door of her truck. Reports of several other similar incidents have come from the Tseshaht reserve recently. (Christine Fred/Facebook photo)

As the months grow colder, Port Alberni’s bear community is getting desperate.

Tseshaht member Christine Fred woke up to a shock Friday morning (Oct. 25), as security cameras had caught a bear opening three of her four truck doors, snooping around for food.

“Luckily we escaped any damages,” Fred captions in the Facebook video she posted. She had scared off the bear by shouting and throwing a pillow at it.

On the same night, Lisa Watts had the same issue with what could have been the very same bear.

“I woke up Saturday morning, three of the doors of my car were opened. He didn’t get anything, but there were bear paw prints on my back seat, and my car absolutely reeked.” Watts said to Ha-Shilth-Sa.

Over the last week, there have been at least 10 incidents of bears opening vehicle doors on the Tseshaht reserve. Residents woke up to find their vehicle doors open and contents of their cars askew in the bear’s attempt to find food.

“Bears opening vehicle doors is certainly never normal,” conservation officer Dan Eichstadter commented, saying how his conversation with Ha-Shilth-Sa was the first they had heard of it. “Car doors are easier to open compared to other doors, a bear must have smelt food in an unlocked vehicle and gotten lucky.”

Hibernation season for bears begins in early November, and the months before that are spent fattening up and finding food. Bears are known opportunists with a strong sense of smell, and find their easiest meals in the form of garbage, compost, or bird feed.

“With it being so close to hibernation, they are extremely food driven,” Eichstadter explained, “they want to add on as many calories as they can.”

“Be sure to take the extra time to clean out your car,” Eichstadter urges, “any type of odour at all will attract them.”

Becoming “bear aware” is the best way to prevent these kinds of incidents. Besides ensuring vehicle doors are locked and there is no food left in overnight, the Conservation Officer Service strongly encourages residents to wildlife-proof your property:

As of Oct. 29, there was a bear reportedly shot dead in the same area Tseshaht residents were having problems. Ha-shilth-sa cannot confirm whether it was the same bear that was snooping through vehicles. 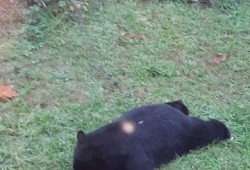