Language revitalization pole to be raised in Port Alberni

Carver Cecil Dawson stands by a nearly completed totem pole at Port Alberni's waterfront. The pole was originally planned to be erected at the University of Victoria, but it has been confirmed that the piece will be raised and remain in Port Alberni, the community where it was carved. (Eric Plummer photos)

A totem pole commissioned to mark the United Nations International Year of Indigenous Languages will not be erected at the University of Victoria as originally planned, but will remain in Port Alberni where it was carved.

As it nears completion, the future home of the 61-foot pole was announced recently by the First Nations Education Foundation, which selected Hesquiaht carver Tim Paul to lead the transformation of the piece at Port Alberni’s waterfront this year.

“We have always taken the approach that we are just the facilitators of the Language Revitalization Pole project, not the owners of a commissioned work of art,” said FNEF Executive Director Scott Jeary in a media statement. “We are really pleased with the way the Port Alberni community has rallied around the project and how they’ve made it their own and taken it to heart.”

The exact permanent location of the pole is yet to be determined, but Jeary said that UVic is supportive of the change in plans.

“When we advised them of the broad, increasing support in the Port Alberni community for the pole to remain there, they were 100 per cent onside with the new plan and I want to thank them for that,” he said.

Carving began in March after the 800-year-old windfallen log - weighing an estimated 60,000 pounds – was transported from the forest floor of Huu-ay-aht territory to Port Alberni’s waterfront. With the pieces now painted, 11 relatives emerge from the western red cedar. It begins with the grizzly bear representing the land at the bottom, progressing up to the mountain chief, thunderbird, wind, sun moon and stars. The piece also includes the two creators of earthquakes.

“They were dwarf-like supernatural beings that lived under the ground,” explained Kwakwaka’wakw carver Cecil Dawson, who assisted Paul in the pole transformation. “Their specific purpose was to bang this drum. When they banged the drum it sang, that’s when the earthquake happened.”

“In our belief system when something is happening to our environment and we’re disrespecting it, that’s when they come out and bang their drum,” he added. “That humbles everybody really quick.”

The totem pole’s creation was commissioned to coincide with the United Nations International Year of Indigenous Languages. 2019 took on this meaning amid concern that 40 per cent of the world’s estimated 6,700 languages are in danger of disappearing – and most of those threatened are Indigenous.

“The ongoing loss of Indigenous languages is particularly devastating, as the complex knowledges and cultures they foster are increasingly being recognized as strategic resources for good governance, peacebuilding, reconciliation, and sustainable development,” reads the UN website. “More importantly, such losses have huge negative impacts Indigenous peoples’ most basic human rights.”

During a presentation of the nearly completed pole on Oct. 24, Huu-ay-aht Ha’wilth Jeff Cook reflected on how his mother tongue was affected when he left Sarita at the age of 6 to attend the Alberni Indian Residential School.

“Even though I was fluent as a child, I lost it when I went to residential school,” he said. “I support anything that has to do with language learning or cultural activities because we never practiced culture at residential school.”

Dawson explained that the project began as a depiction of the Nuu-chah-nulth world view, but over its carving other cultures had input. For this reason a bison and inukshuk are included in the pole in recognition to plains First Nations and Inuit influences.

“It started to become a community project when we started to invite people in,” said Dawson. “There’s people from all over the world, Germany, Europe, New Zealand, and everywhere. I would encourage them to take a piece of 800 years with them and they did. So the whole spirit of the pole changed.”

With no government support, the pole project has encountered financing challenges, and by July available funds had dried up. But the carvers continued.

“Early on when we realised there was no set funding in place, it wasn’t an issue for Tim and myself,” said Dawson. “It was always about the message.”

Paul commented on how the carving continued in one of several videos by the FNEF documenting the pole’s transformation.

“Every one of those guys down there understands that the best art of all in our world is the art of giving,” he said.

In the fall Paul took a break from the carving after the passing of his wife, Monica, and the project awaits his return to complete the process. Once caving is finished, a ceremony will be held to close the pole’s eyes and lay it to rest until the piece is raised, which is planned for spring 2020.

More funds are still required for structural engineering at the yet-to-be determined location where it will permanently stand in Port Alberni. A fundraising gala is being hosted by the Owls Path of Port Alberni on Nov. 22. Information and tickets can purchased at facebook.com/events/535812040564591/. 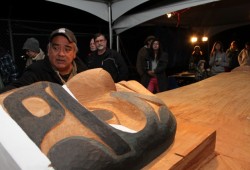 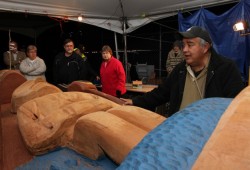 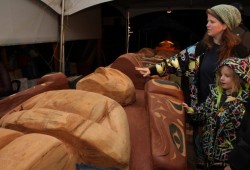