Tristan Hinder-Hohlweg, pictured, and Ahousaht member Jaiden George presented their film Finding Solitude in Tofino on Nov. 23. The project was approached as a lover letter to Vancouver Island, looking at a receding glacier and old growth deforestation. (Melissa Renwick photos)

As Jaiden George poured over maps of Vancouver Island in his high school art room, he searched for a way to tell a story that would combine his love of filmmaking and mountain hiking. But as he dug deeper, the adventure film he dreamed of started to take new shape.

While working on the first draft in 2017, he came across an article by the Sierra Club BC, a non-profit group that aims to protect British Columbia’s wilderness, and “was incredibly shocked to discover just how little old-growth we have [left] on the island,” he said.

George contemplated why it wasn’t being more widely discussed and “knew immediately that I needed to orient the film around the environment,” he said. “It was a turning point, not just for the film, but in my art practice as a whole.”

Partnering with 16-year-old cinematographer Tristan Hinder-Hohlweg, the duo began the two-year-long journey of creating a short film that explores some of the environmental issues facing Vancouver Island. It is like a love letter to the island they call home.

Carrying 50-pound backpacks, the young men scrambled to mountain peaks like the Comox Glacier to illustrate the effects of climate change.

“Culturally, it is the most important mountain to the K'ómoks First Nations,” says Hinder-Hohlweg.

Referred to as the great white whale, the Comox Glacier is an icon that’s “disappearing before their eyes,” he said.

The pair, who met in the high school art room, also focused on issues of deforestation across the island. Expansive drone footage catapults viewers into mountainous landscapes, showing the dichotomy between the lush, intact old-growth forests and the clear-cuts.

Over the years, the forestry practices have “allegedly become more sustainable, but when you go back there and you see what’s happening it makes you think twice,” said Hinder-Hohlweg.

The pair got their start by self-funding the project before raising $7,000 through a silent auction and going on to receive a Clayoquot Biosphere Trust Youth and Education Grant.

Unable to drive, the filmmakers called on their friends and family to shuttle them down “sketchy” back-roads to the remote, isolated places - like the 5040 Peak and Della Falls, which are highlighted in the film.

On Nov. 17, Finding Solitude premiered in Ucluelet to a sold-out audience. The film had two more sold-out showings before being screened as part of the Vancouver Island Mountain Film Festival in Tofino on Nov. 23.

“It’s been quite cool and a little weird, honestly,” said George, who is in his second year at Emily Carr University studying for a BFA in photography. “We’ve had people coming up and getting pictures with us.”

“It was so surreal,” said George, who is a future Hereditary Chief for the Ahousaht First Nation. “We’re connecting with such big names.”

Right now, the filmmakers are focusing on promoting their film “to move the message,” in between their studies. But Hinder-Hohlweg is confident their next film will also be about the natural world because “when you go to a place [where] you feel solitude,” he said, “you feel like there’s hope in your heart that there’s still a chance you can save these places.”

More information on the film can be found at https://www.findingsolitudefilm.com 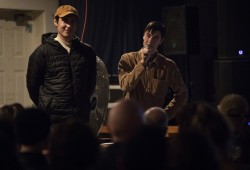 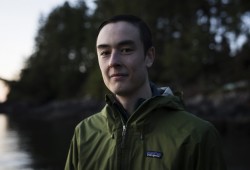