Artist Vince Smith presents a sign to welcome visitors to his First Nation's territory on the logging road that leads to Zeballos. (Denise Titian photos)

The people of Ehattesaht/Chinehkint are celebrating the unveiling of a new wooden sign welcoming people to their traditional territories. The event took place on the bright frosty morning of Nov. 28 about halfway along the gravel forest service road leading into Zeballos.

Smith said he was hired two years earlier by Ehattesaht First Nation to carve the sign. He consulted with Ehattesaht elders Tony John and Earl Smith about what should be featured on the sign. It was decided that the logo of the Thunderbird would be on the sign as the emblem of the Ehattesaht/Chinehkint Ha’wiih.

Ehattesaht Ha’wilth Georgina Amos could not attend the event but sent a message which was read to the crowd.

“Today I am happy and proud. This sign teaches about protocol. It reminds people whose territory they are hunting in,” she wrote.

Brian Frisco Lucas offered a prayer chant in which he called up on the Creator to send the spirit of the wolf to protect Ehattesaht/Chinehkint territory.

A blue tarp was removed from the sign by a group of men as the crowd cheered.

The sign, made of red and yellow cedar, stands on a hillside about 24 kilometres down the Zeballos Forest Service Road. Some of the materials and labor were donated by people like Mark Kenny, a former Ehattesaht/Chinehkint First Nation employee, and Don Cox, the former mayor of Zeballos. The Ehattesaht First Nation thanks everyone that contributed to the project. 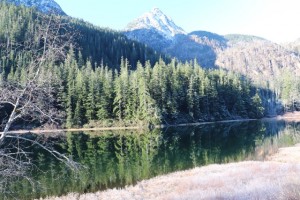 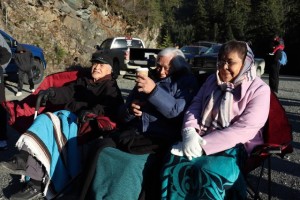 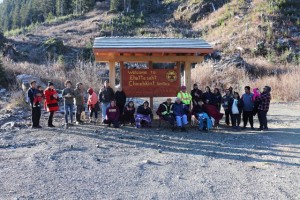