Synthetic debris has collected exponentially over the years in the rivers and streams near Ahousaht, and is being ingested by the region’s keystone species. In a partnership with the First Nation, the Coastal Restoration Society is undertaking a daily, large-scale cleanup. (Melissa Renwick photos)

A team from a Tofino-based group that specializes in habitat remediation and pollution clean-up are scattered across the Cypre River basin. With burlap sacks schlepped over their shoulders, they scan the terrain for industrial marine debris that has washed to shore, impeding salmon’s migratory routes. Within minutes, a decaying rubber tire covered in last night’s frost is spotted, along with a rusting fish farm feeding dock that drifts with the tide in shallow ocean waters.

George John is an Ahousaht guardian and serves as the Ahousaht operator and manager for a new project being led by Coastal Restoration Society (CRS). Examining the feeding dock, he questions just how long it has been there degrading in the water.

The Migratory Corridor Revitalization Project focuses on cleaning industrialized marine debris along the corridor from the Cypre River to the Atleo River. It was launched mid-November in effort to help reduce the amount of pollutants that are killing salmon as they migrate into the open ocean.

You can see all of the Styrofoam that has washed up over the years.

“That’s from every tide and every season that goes by,” says John. “You can dig deeper and deeper and it’s just there – it’s embedded in there.”

When the juvenile salmon travel through the river basins, they’re feeding on that small debris – like the pellets of Styrofoam – which are getting lodged in their stomachs, says Spencer Binda, the Tofino coordinator for the project.

“It’s killing a lot of [the salmon} before they even have a chance at surviving,” he says.

Focusing on areas where historically there have been high salmon runs, CRS is hoping that removing the debris will help to increase the returns to Clayoquot Sound.

“With fewer than 300 Chinook salmon observed in any system to date,” according to the Fisheries and Oceans Canada West Coast of Vancouver Island 2019 Stock Assessment, the organization is sounding the alarms.

Working directly with the Ahousaht First Nation, CRS emphasizes integrating their traditional knowledge of the terrain into the project. From knowing how to safely access remote areas within the river basins, to knowing where the salmon used to run from, “it’s an endless tap of knowledge,” says Binda.

“It shows that we care for our territories, our homelands,” says John, who has been working with CRS since last year.

Currently, the project is supported by local businesses, like Clayoquot Wilderness Resort, coupled with major marine industries, like Creative Salmon and Cermaq. But Binda says they are unable to sustain year-round employment without government funding.

Despite several attempts applying to government grants, including the Coastal Restoration Fund, they have been unsuccessful in securing support from the province or feds.

“I’m not sure what we’ve got to do next, other than keep trying and keep doing these projects and keep showing the success and need for it,” says Binda. “In order for this to be truly effective, we need to be out here every day.”

“When you leave, you’re always thinking about coming back,” he says.

Salmon are a keystone species that are important not only to the culture, but the ecology of the area. Without them, the ecosystem will collapse.

If he could, Binda says he would be out cleaning the shorelines every day, “so generations to come are going to get here and have that same feeling.” 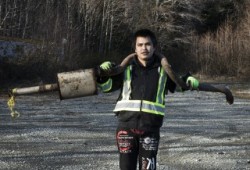 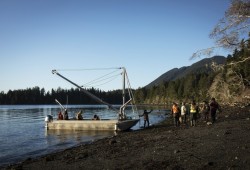 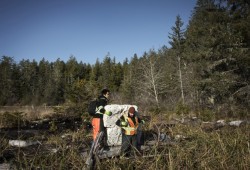 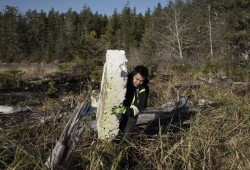 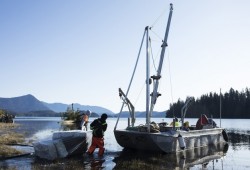 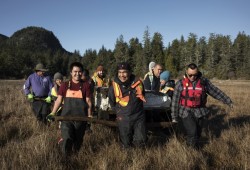