With a narrow winter window in which to clear salmon passage at Big Bar Slide, the First Nations Leadership Council (FNLC) is urging federal and provincial governments to declare a state of emergency.

“Extreme efforts and resources must be put forth immediately to preserve cultures and ways of life that have existed for thousands of years,” said BCAFN Regional Chief Terry Teegee.

Although the slide barrier was reduced over the course of last summer in a co-ordinated response, remaining rock poses a significant obstacle to salmon on their migratory path to Interior spawning grounds. Early Stuart sockeye and early chinook runs are at greatest risk of collapse.

“The remaining blockage will undoubtedly impact upstream First Nations’ access to food sources next year and has the potential to severely impair future cycles of salmon stocks, which will be cause for huge losses to First Nations, commercial and sport fisheries in future years,” said Lydia Hwitsum of the First Nations Summit.

FNLC’s urgent appeal came in a news release Monday, the same day Courtenay-Alberni MP Gord Johns called in the House of Commons for a “salmon emergency.”

“This is not about blame or shame,” Johns told the House after explaining the critical threat to the lifeblood of B.C.’s greatest salmon resource, the Fraser River. “This is about doing the right thing, right now. We need action.”

Teegee said First Nations leaders in communities along the river continue to feel a lack of communications about extensive work needed in the river channel as the water level drops.

“What’s really being planned in the next few months? This is the opportune time to do something,” Teegee said. “There is a limited amount of time.”

Both FNLC and Johns have met with newly appointed Fisheries Minister Bernadette Jordan, making their case directly to the Nova Scotia MP. All user groups, including recreational and commercial fisheries, should be included in fishery closures to help stocks recover, Teegee said.

“There are a number of pressures on a number of species,” Teegee said. “I think, for many First Nations, this has upped the ante.”

With the river level dropping, DFO issued a request in November for private-sector input on debris removal. Those contracts were put to tender Friday.

“If we have challenges, more areas around the Fraser River could become unstable,” she said. “I hate to be pessimistic about this, but this is what climate change is doing.”

Wilson said they are refining a process through which Emergency Management B.C. resources can be distributed to First Nations for local emergencies such as slides or wildfire. A series of consultations have been held with First Nations with the aim of developing a framework.

Since 1995, $30 million in transfer payments have gone to Emergency Management B.C., a provincial agency that decides where funds are allocated. First Nations Emergency Services, a not-for-profit society that works closely with Indigenous communities, should be getting more of those resources to address wildfire threats, she said. 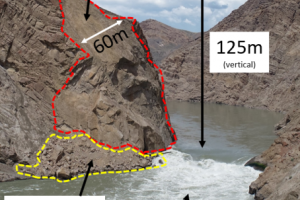