Armada Senior Girls basketball player Memphis Dick practices with her team in the ADSS Gym. The Tseshaht player is getting ready for her third Totem Tournament on Jan.9-11. (Karly Blats photos)

For Grade 12 student Memphis Dick, playing in the annual Alberni District Secondary School Totem Tournament is about making lasting memories with her team.

Dick, 17, has been a member of the Armada Senior Girls basketball team for three years and is excited to compete in the 65th annual tournament taking place from Jan. 9-11.

“I’m hoping to make a whole bunch of memories. It’s my last year and I want to be able to carry memories throughout my life,” Dick said, who is from Tseshaht. “I’ve been to Totem two times already. I moved up to Senior when I was in Grade 10 because they needed a point guard. Every time it’s been very memorable. It’s the one thing I look forward to every year.”

Dick has been playing basketball for about seven years and got her start while attending Haahuupayak School.

“My coaches there thought I was really athletic and thought it would be good for me to try basketball,” Dick said. “From there I noticed I was good so I kept going with it.”

Dick has competed at two North American Indigenous Games with the U14 and U16 girls’ basketball teams and this year she’s hoping to attend the sporting event, taking place in Halifax, with the U19 team.

Assistant coach to the senior girls’ team, Dennis Bill, said the girls have had a bit of a rough start to their season but he’s optimistic the team will work out some kinks in time for Totem.

“For Totem we’re hoping to have a really good strong start against Kwalikum and then we will see how we go from there. We’re hoping to make the big final game,” Bill said.

Dick and several of her teammates represent Armada as Nuu-chah-nulth players—a number Bill says makes up about half of the players from both the senior girls’ and boys’ teams.

Bill said basketball is an important motivator for Nuu-chah-nulth youth.

“I know we often use athletics as a motivation piece for keeping students in school, so often times they might not be strong academically but they’re strong athletes, that’s what keeps them going here,” he said.

For the senior boys’ team, coach Craig Brooks said this year he’s seen the highest number of Nuu-chah-nulth players in the past five years.

Senior boys’ player ja’Ered Atleo is among the Indigenous players and he’s excited to participate in his second Totem Tournament.

“I’m looking to see the best performance possible from not only myself but my teammates and coaches,” said the 17-year-old from Ahousaht and Hesquiaht. “I like the energy that comes from basketball. It’s more of a family sport compared to others.”

Atleo’s teammate Jordan Mack,16, from Ahousaht said he’s looking forward to pretty much everything about competing in his first Totem Tournament.

Mack, who got his start playing basketball in Ahousaht, was named the student athlete of the month for November—a title he earned by showing kindness and helping others.

The Totem Tournament will see crowds of about 600 to 700 at Armada team feature games over the three-day event. The tournament not only features basketball but also performances by the ADSS cheer and dance teams and the Totem pep band.

“It seems to change and evolve a little bit every year,” said tournament director Greg Freethy. “We added last year the pep band and that’s really gone to another level this year, we have about 40 students now that are part of the pep band. It continues to be more student involvement from various groups around the school.”

The tournament begins on Thursday, Jan. 9 with both Armada teams playing against the Kwalikum teams. The senior boys will play first at 5:15 p.m., followed by the senior girls at 7 p.m. As per Totem tradition, the Armada senior boys and girls teams always play in the feature games each night. 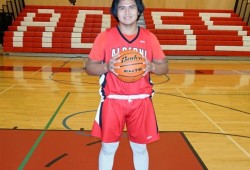 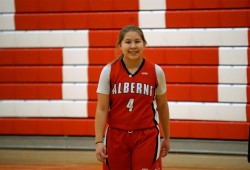