Armada coach Craig Brooks said his team’s performance throughout the tournament was like a “tale of two cities.”

“We had moments where we looked like world beaters and then I think the moment got a little big for us and we couldn’t recover,” Brooks said.

The boys got over their initial nerves quickly and executed their first game on Thursday night against Kwalikum with a final score of 83-60.

“We had a rough game plan that we put together as far as what we thought we should expect and then things kind of went according to plan,” Brooks said. “We were able to get everyone off the bench and playing so that’s always good when you can do that in a win.”

“We’ve won five in the last six games (in the regular season) and we’ve been talking to each other on the court and good things happen,” Brooks said. “We tend to fall apart when we sort of become a little too individualistic or we start playing hero ball what we call it.”

Armada’s Chris Tatoosh was named player of the game against Kwalikum, who Brooks says is one of the hardest working players on the court.

“He logs the most minutes of anybody on the court. We try to feed him the ball as much as possible…once his shot heats up as we saw last night he can just start draining them from anywhere on the court,” Brooks said.

Brooks also gave a shout out to Ahousaht player  ja’Ered Atleo, who he says guarded Kwalikum’s highest scorer and held him to only about four points the whole game.

After an exciting win on night one, the Armada went on to lose their following two games on Friday and Saturday night. They lost to Carihi (67-57) on Friday and to Reynolds (67-46) on Saturday.

“I’m happy with the game we played against Carihi and I’m happy with our first half against Reynolds,” Brooks said. “We’ve kind of fallen into some of the same bad habits we had earlier in the year. It’s a little hard to take but the arrow is trending up so I’m happy with that I think. Reynolds was a better team so I can accept that.”

Armada’s Cam Cyr was player of the game against Carihi and Jermaine Bulware was against Reynolds.

Brooks said the most challenging part of the tournament for his team was controlling their emotions.

“[The tournament is so big the entire community comes out to support and it’s loud,” Brooks said. “The energy is palpable, you can feel it when you walk into the building, and getting young men to sort of channel that into positive emotion - as opposed to having it overwhelm you - I think is always the biggest challenge.”

Armada’s Cam Cyr was chosen for the boys All-Star Team for his noticeably strong performance throughout the tournament.

“He’s a third year senior so I’ve had the honour of being able to coach him from Grade 10,” Brooks said. “He’s very vocal, he’ll take charge on the court and for the most part he takes the right times to put the team on his shoulders and carry us through some rough patches sometimes.”

Overall, Brooks believes the tournament was a huge confidence booster for the team and showed them their potential going forward with the season. 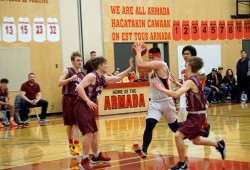 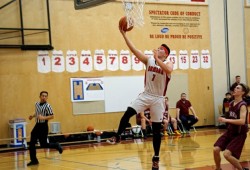 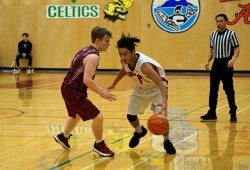