The billboards were put up with funds raised from the Lil’ Red Dress Project—a campaign spearheaded by friends Carla Voyageur and Jeannine Lindsay from the Comox Valley who wanted to offer financial assistance to families of Missing and Murdered Indigenous Women and Girls (MMIWG) to advertise their missing loved ones around Vancouver Island.

Through the Lil’ Red Dress Project, over the last year and a half more than a dozen volunteers have created hundreds of hand-made beaded red dress pins and earrings. All proceeds from the beadwork go towards helping Indigenous families. So far the project has raised close to $10,000.

The electronic billboard along the Island Highway, plus a sign in Black Creek with Pete’s information, will be up for four months at a cost of $7,000.

“I think more than anything we’re hoping for awareness,” Voyageur said. “We would love to have the outcome where information comes in about these missing women but we also just want to build awareness that it’s not just something in other parts of Canada, it’s here on Vancouver Island, it’s local.”

Young, a Nuu-chah-nulth woman, went missing from Nanaimo almost 18 years ago at the age of 21 after leaving a bar with a man she just met.

Pete, from the Quatsino First Nation on Northern Vancouver Island, went missing in August 2011 from North Vancouver at the age of 28.

Young’s aunt, Carol Frank, said the billboards are important in keeping the memory of her niece alive.

“Lisa was chosen as one of the Nuu-chah-nulth women for the billboard so it was exciting,” Frank said. “With my late sister, she always wanted to let as many people know Lisa’s name and that she will never be forgotten, she always worked really hard in doing that.”

Frank believes the billboards will bring more awareness to MMIWG and possibly spark a memory in someone who may have information about Young’s case.

“We just want people to not forget [Lisa], to remember that she is someone’s family. I know there's so many people that are missing we just try our best to keep her name out there,” Frank said. “We’ve got a Lisa Marie Young Facebook page and we've got close to about 600 members now…more and more people are finding out about Lisa.”

Going forward, Voyageur and Lindsay hope to continue adding billboards and signage for MMIWG on Vancouver Island and possibly on the mainland if they can raise enough funds.

“I think it’s important to continue with the project because there are a lot of other family members out there who are still missing,” Lindsay said. “Also to hopefully help bring this into classrooms and into universities so we can bring more awareness in that sense as well.”

Lisa Watts, MMIWG family support worker with the Nuu-chah-nulth Tribal Council, said she’s visited the billboards and is quite excited about them.

“From the start I was very impressed with this project and their cause. When I heard the story it just blows my socks off,” Watts said. “Two ladies sat down and they talked about how they noticed that there were billboards for non-native cold case files. There was several in their community…and they were like ‘well how come our sisters aren’t up there?’ They found out that billboards coast approximately up to $3,500 a month and then they proclaimed to themselves our families can’t afford this.”

Watts, who was not a beader, became so impressed with the Lil’ Red Dress Project that she learned how to make the red dress pins and began selling them to support the campaign.

So far she’s made about 70 pins and has sold the majority of them to Nuu-chah-nulth people.

“There’s huge support within our own people for this project,” Watts said. “I love supporting things that are meaningful. First Nation women’s lives are important.”

Beaders with the Lil’ Red Dress Project had stopped taking orders in October in order to catch up with requests, but will open their sales again for 24 hours on Jan. 15. Find them online at www.lilreddressproject.ca/ or www.facebook.com/lilreddress. 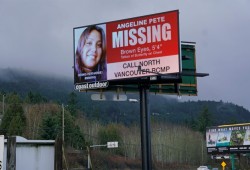 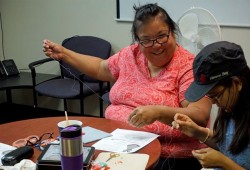