Major renovations are underway on the Port Alberni waterfront to convert the Port Fish plant into a regional hub for food processing and innovation.

One of two regional food initiatives chosen last fall by the provincial government, the $1.5-million facility is expected to be ready for occupancy within six months, said Zoran Knezevic, president and CEO of Port Alberni Port Authority (PAPA).

While First Nations aren’t among the anchor tenants so far committed to the project, they are among the suppliers and see a long-term potential for other food-processing opportunities.

In addition to $500,000 invested by the province, PAPA has put $500,000 into the hub project, combined with $300,000 from the Island Coastal Economic Trust. The port authority, which owns the building, is also project lead after the city spearheaded a two-stage competition for Ministry of Agriculture funding last summer.

“We are very much involved,” Knezevic said. “We see this as an important project for the community.”

A food hub is a centralized food and beverage processing facility that provides entrepreneurs with affordable access to production, specialized equipment and refrigeration along with the capacity for research and development. In Port Alberni, the hub will be dedicated primarily to seafood processing.

PAPA already has commitments from five firms lined up to occupy the 12,000 square-foot facility, companies that process a variety of aquaculture products as well as land-based natural foods.

“The focus of the renovations is to create a processing plant within that has five units,” said Dave McCormick, business development and public relations director with PAPA.

Those include units for shellfish, fin fish, seaweed and terrestrial food. As well, the facility will offer a commercial kitchen facility outfitted with food processing equipment and food testing, designed for smaller-scale business ventures.

Two unused shellfish tenures held by Huu-ay-aht and Uchucklesaht were seeded with kelp in December to produce the first crop, which will be processed by Cascadia at the Port Alberni facility later this year. The kelp crop is already showing growth and should be ready to harvest by June, said Larry Johnson, president of Nuu-chah-nulth Seafood.

“Our agreement with Cascadia is a three-year deal to build capacity and infrastructure for the two communities,” Johnson said. “I think we’ll learn a lot in Year One,” he added.

Asia-Pacific is the centre of the global seaweed or micro-algae industry, yet North America’s industry is expected to grow faster than Asia’s over the next five years. The Island’s west coast offers superb marine growing conditions. Sugar kelp, a highly nutritional and versatile brown algae with multiple product uses, has been described as “the new kale.”

Michael Williamson, Cascadia’s president, said recently that their plan is to “prove through” the system in 2020 and expand to 20 hectares the following year. He described the Port Fish plant as ideal, even before the project got a green light from the province.

The sugar kelp deal marks a first venture into seaweed aquaculture for Nuu-chah-nulth Seafood, but aquaculture has been on the company’s radar for a while. They opted not to become directly involved in the food processing hub because that wouldn’t fit into their five-year strategic plan, Johnson said. Still, he sees the long-term benefits of the project.

“I think it will be a good thing for Port Alberni,” Johnson said. “It’s definitely needed.”

Neither Hupacasath nor Tseshaht, which purchased the Port Fish plant from Hub City before selling it to Ahousaht a few years back, is currently involved in the food hub project. They do, however, see possibilities for on-site production and employment.

The City of Port Alberni played a pivotal role in securing provincial funding for the project through the province’s Feed B.C. Initiative, designed to increase use of local foods. Pat Deakin, the city’s economic development manager, said the door remains open to Nuu-chah-nulth Seafood to become directly involved in the hub.

“Their recommendation to us was to get out to the individual First Nations and the individual Indigenous fishermen to make them aware of the ability to add value to their products,” Deakin said.

More nations are getting into aquaculture production, which will offer more opportunities to participate in the hub project, he added.

Port Fish had been shuttered since 2008, so the renovations are extensive, Knezevic said. They’re doing structural work and insulation while upgrading walls, electrical and plumbing. New refrigeration equipment is needed, too.

Canadian Seafood Processing and Forest For Dinner, a Qualicum Beach company that specializes in wild food harvest, are also among committed tenants. 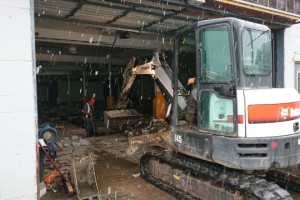 The old plant is undergoing a $1.5-million retrofit to boost the regional sector. Kelp from Barkley Sound is in processing plans for this year. 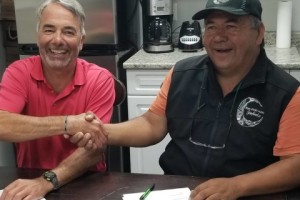