Four wolves live on a property at the southern edge of Nanaimo, including Mahikan.  (Eric Plummer photos)

Gary Allan loves wolves. He has a small pack of hybrid wolf dogs at his rural Nanaimo property that he lovingly raised from just a few weeks old. The eldest one, Tundra, travels with Allen helping to raise awareness of the importance of wolves in a healthy ecosystem.

Allen founded the Tundra Speaks Society to teach the community about wolves. He elicited the help of Tseshaht’s Randy Fred to bring in an Indigenous component to his presentation because, he says, he knows that Canada’s Aboriginal people revere the wolf and understand its importance in the cycle of life.

Allan, a retired probation officer, began his pack with the purchase of the male wolf dog Meshach, named after a biblical character who was thrown into a fiery furnace for not bowing to the king. Meshach, 75 per cent wolf, was purchased from a breeder.

Tundra, 90 per cent wolf, was bred in Alberta and came to Allen in the spring of 2007 when she was just three weeks old. She is domesticated and is gentle, loving attention from visitors.

Nahanni and Mahikan came from a breeder in the U.S. and eventually mated. Mahikan emerged from her den in the spring of 2019 with her pups Stqe:ye, a female, and Denali, a male. Sadly, Nahanni died just days before the pups emerged from the den.

Allan and his wife Sally own a rural property on the outskirts of Nanaimo. Behind their home is cleared land that is enclosed by 600 feet of chain link fence. The fence is tall and well built with additional mesh buried in the soil under the fence the prevent the wolves from digging their way out.

There are a few trees that provide shade for the wolves and it is clear that they have dug themselves some hollows to lay in. The property gently slopes downhill and on one embankment, Mahikan, made her den.

The wolf enclosure abuts the back of the Allan home and with large windows, the wolves can be viewed playing together from the comfort of the Allen living room. Tundra, an elder wolf, stays indoors and has a large mattress lying next to a crackling woodstove; but she prefers to lay next to the Allen’s bed after checking out the visitors.

For a fee, Tundra will make an appearance on behalf of Tundra Speaks Society, directed by Gary Allan and his friend, Randy Fred. The two men make presentations at schools and small community groups with a focus on promoting the value of Indigenous laws with respect to sustaining and protecting ecosystems. They also advocate for the appreciation of wolves in our environment.

Randolph (Randy) Fred, who is legally blind, was the nephew of renowned artist and actor Dr. George Clutesi, who worked hard to preserve Tseshaht culture. Fred uses some of Clutesi’s teachings in his presentations, including shared Tseshaht songs and Nuu-chah-nulth lore.

In his presentations Fred explains that there are three distinct cultural groups on Vancouver Island: the Kwakwaka’wakw in the north, Nuu-chah-nulth on central west coast and Coast Salish in the south.

“I do this to dispel the myth that we are all the same,” said Fred.

The three nations are distinct groups with their own languages and culture that have many similarities.

“It’s much like the similarities and differences of say, the French and Germans,” said Fred.

But there are some principles and philosophies that they share – one being the respect they have for the wolf.

Fred notes that most Nuu-chah-nulth dugout canoes feature a carved wolf head on the bow of the canoe.

“The biggest canoes were used for hunting whales and wolves are known for their ability to hunt,” he explained.

Another parallel between Indigenous people’s culture and wolf culture is the intergenerational reliance on one another.

“Elders would look after the kids while the adults were out getting food,” said Fred.

While the hunters were out the caregivers were teaching the young. In wolf culture it is the same. While the hunters are getting food, the juvenile wolves are rough playing with the smaller ones, teaching them early hunting skills. Allen says it takes a wolf about three years to become a full-fledged hunter, able to take down large game.

And when something happen to breaks the cycle of learning for a young wolf, it wreaks havoc and creates an imbalance in nature. A wolf cull is one way this can happen.

“My father used to hunt seals; he would turn in the noses to collect a $5 bounty,” said Fred.

Back in the early to mid-1900s, the government blamed seals for the dwindling salmon stocks and ordered a cull on pinnipeds. Hundreds of thousand of seals were culled. According to Scott Wallace, a research scientist with the David Suzuki Foundation, in 1941sea lions were culled by machine guns mounted on fishery patrol vessels in a conservation effort to save the seafood wealth of the nation. Before then in 1918 fisheries “engineer” J. McHugh reported that he put dynamite on seal haul outs at the mouth of the Fraser River, waited for 200 to 300 seals to re-aggregate and then detonated the explosives. He reported, “their bodies were blown to atoms, not a piece larger than two inches being found.”

Despite the cull of pinnipeds, salmon stocks continue to dwindle.

Allen says that wolves, like Indigenous nations, have territories from which they hunt. A pack of wolves may bring down large game like elk, feeding for a week. Whatever is not eaten by wolves is cleaned up by other scavenger species.

Allen explains that if, for example, the breeding pair from a pack of six wolves is killed, changes in the group will occur. The younger wolves may not gain the ability to take down large game and will likely move onto easier kills, like a farmer’s livestock.

Allen says hunters are shooting wolves from helicopters as mandated by a government-ordered cull to deal with dwindling numbers of caribou.

“When you break the wolf’s social stability they hunt more and they kill more; when the wolf leaders are gone the youngsters will go to smaller livestock because they don’t have the skill set to hunt big game,” said Allan.

Allen says that the wolf is a keystone species that keeps balance in nature.

“First Nations people revered the wolf and saw it as their brother,” reads a pamphlet from the SWELL Wolf Education Centre, also owned by Allan.

A wonderful ambassador for wolf education, Tundra has visited more than 200 schools and institutions showing off her gentle spirit for more than 11 years. She has been to schools in Tofino and Ucluelet.

More recently, on Dec. 9, 2019, she was a guest at the B.C. Legislature where she was introduced to Minister of Indigenous Relations and Reconciliation Scott Fraser. She also met with the Honourable Rob Fleming, minister of education.

Tundra was a popular visitor as dozens of government staff emerged from their offices to visit the first wolf allowed into Victoria’s Legislature buildings. Allen and Fred arranged to meet with the ministers to gain their support for the educational work the Tundra Speaks Society does.

“…Let’s hope she (Tundra) has had a positive effect on the staff there to gain some better treatment of Tundra’s wild cousins,” wrote Fred in his online blog.  He went on to say that they had a productive meeting with the ministers, informing them of their work with Tundra in schools and communities and that they look forward to working with the two ministries to advance their programs.

The Ministry of Education and the Ministry of Indigenous Relations and Reconciliation told Ha-Shilth-Sa that they have made no commitments to Tundra Speaks Society, “but opportunities for Tundra Speaks Society to share teaching resources they have developed were discussed at that time; Minister of Indigenous Relations and Reconciliation Scott Fraser was invited to visit the center and looks forward to a future visit.”

Tundra is getting up there in age and long trips are no longer possible. But Allan says that groups can arrange for a local visit and presentation where they will be taken on a walk through the forest with the wolf.

Allen has published a book called Tundra, a Gift from the Creator, which will be available Jan. 31, 2020. 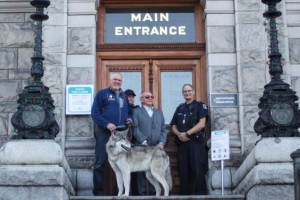 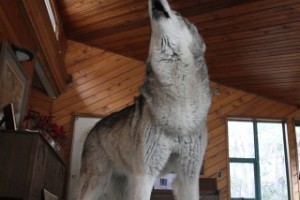 Tundra howls inside as the others joined in from the outside. 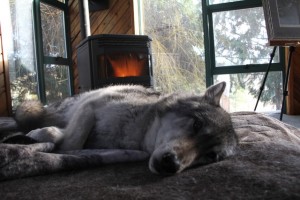 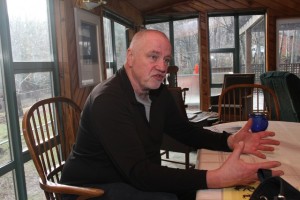 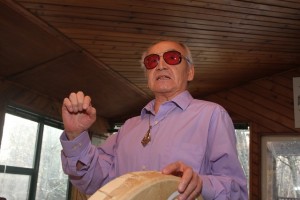 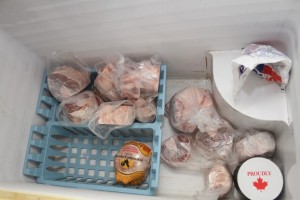 The Wolves eat over $600 month worth of meat. 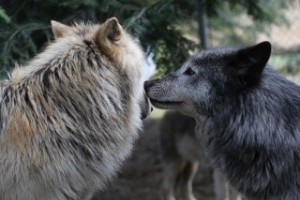