Following a lengthy absence, the Maaqtusiis Ma'as once again found themselves competing at the All Native Basketball Tournament in Prince Rupert. (Rebecca Atleo photo)

Both of the Ahousaht First Nation entries registered respectable performances at one of the province’s most prestigious basketball tournaments.

For starters, even though they had not competed at the All Native Basketball Tournament (ANBT) in about a half dozen years, the Maaqtusiis Ma’as for the most part managed to hold their own in the women’s division.

The squad was able to win two of its four matches in the tournament, which wrapped up Saturday, Feb. 15 in Prince Rupert.

And the Maaqtusiis Suns kicked off their action by racking up three consecutive wins before they were eliminated by the eventual tournament champions in the men’s category.

This marked the 61st year the Prince Rupert tourney has been staged. A total of 54 teams took part.

Besides the women’s and men’s divisions, there were also two other categories. There was a men’s intermediate grouping for those 21 and under as well as a men’s masters division for those 35 and over.

Esther Robinson, the coach of the Maaqtusiis women’s club, was pleasantly surprised with the efforts of her charges. Entering the event she had expressed concerns her side had not participated in this tournament for a number of years. Plus, the Ma’as were not even able to practice all together as a unit beforehand.

“That’s what I was worried about – that we would lose two straight games and then we’d have to come home right away,” Robinson said.

Only five of the players on the Ma’as roster live in the community of Ahousaht. Though they live in urban centres, the other half dozen individuals on the squad have a connection to the Ahousaht First Nation and were able to suit up for the team.

The fact Ahousaht does not have all of its players living in its Flores Island community is one of the reasons the club had not entered the ANBT the last several years.

Robinson’s charges did end up losing their first game against a Vancouver-based squad.

“We kept up with them and just ran out of steam at the end,” Robinson said.

After this initial setback the Ma’as then managed to register a pair of victories, over teams representing Bella Coola and Lax Kw’alaams. The triumph over Bella Coola was especially significant.

“We really struggled in junior ball and up until now against them,” Robinson said. “We ended up beating them by about 30 points.”

After their triumph over Lax Kw’alaams, the Ma’as then saw their tournament come to an end when they suffered their second defeat, against a team from Kitkatla.

Robinson, however, is excited about the team’s future. The Ma’as will participate in a Port Alberni tournament, which begins on Friday. And they will also compete at an event in Kamloops in April.

Robinson said the team has plenty of support from the Ahousaht First Nation.

“Our community is backing us 100 per cent,” she said. “And I have girls calling and asking if they can play with us next year.”

It didn’t take long for news of the Ma’as moderate successes in Prince Rupert to spread.

“I was shocked,” Robinson said. “I had girls calling me after I got home. I had three girls call me. And they’re tall girls, which is a plus for us. We had a very short team this year.”

Robinson is hoping the Ma’as will return to the ANBT in 2021. And she’s hoping the team will be able to enter plenty of other events as well

“I’ve got people agreeing with me they should train together all year long,” she said. “We just need 12 dedicated ladies that will train really hard.”

The club was then downed by Skidegate in its fourth outing. Skidegate went on to capture the men’s division.

The Suns had their tourney come to an end when they were beaten by Kitkatla, right after their loss to Skidegate.

Kitimaat ended up winning the women’s category. And the other division champs were Prince Rupert (Intermediate Men’s) and New Aiyansh (Masters). 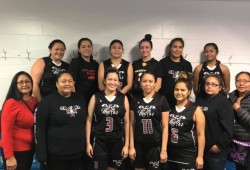