An investigative paper published this month by researchers at the University of Victoria (UVic) claims the federal government is failing to meaningfully engage with Indigenous knowledge in environmental decision-making.

The paper, Indigenous knowledge and federal environmental assessments in Canada: applying past lessons to the 2019 impact assessment act, published in the journal of FACETS by  Lauren Eckert and Nick XEMŦOLTW̱ Claxton, argues that a fundamental shift is needed in how government treats Indigenous rights and knowledge.

Eckert is a UVic PhD candidate, Raincoast Conservation Foundation fellow and Vanier Scholar.  Claxton is an assistant professor from UVic’s Faculty of Human and Social Development and elected chief of Tsawout Nation.

The researchers propose that Canada should move toward environmental assessment processes that are Indigenous-led and co-managed.

“Environmental assessment processes have the potential to generate environmentally sound, socially equitable decisions across Canada. But without fundamental shifts in the way current policy relates to, engages with and recognizes the rights of Indigenous peoples and their knowledge, outcomes may continue to generate conflict between federal and Indigenous governments,” the researchers say in a UVic press release. “Indigenous knowledge refers to the complex systems of knowledge, belief and practice that have informed Indigenous environmental stewardship and decision-making for millennia.”

During the research process, a team of colleagues analyzed 19 peer-reviewed papers (published over the last four decades) to understand what obstacles exist between harmonizing Indigenous knowledge and federal environmental assessment processes in Canada.

They identified six categories of obstacles, including historical, legal, political, procedural and resource limitations. They also considered the federal government’s new 2019 Impact Assessment Act with an aim to understand how—if any—of the identified obstacles have been overcome in the recently passed legislation.

“Our analysis found that the act is a step in the direction towards better relationships between Indigenous knowledge and environmental assessment processes. However, many deep-rooted obstacles still exist,” the researchers state in the press release. “These include the on-going impacts of colonization and the exclusion of Indigenous peoples from decision-making processes, along with the reality that environmental decision-making power is ultimately in the hands of the government.”

“Ultimately, we recommend that Canada’s legislative and federal structures recognize Indigenous-led environmental assessments. A number of examples of these processes exist, and it is through these approaches—led by Indigenous Nations, for Indigenous Nations—that there can be opportunity for equitable knowledge and power-sharing,” states the press release. “For instance, the Squamish Nation partnered with project proponents in a Squamish-led assessment of the Wood Fibre LNG project in 2015. In the same year, the Tsleil-Waututh Nation completed an independently led environmental assessment of the Trans Mountain Expansion project (TMX) based on Tsleil-Waututh values and law.”

Judith Sayers, Nuu-chah-nulth Tribal Council president, believes environmental assessment processes need to be revisited in light of the Declaration on the Rights of Indigenous Peoples.

“First Nations need to be at the table looking at all the environmental issues and the government in turn has to take their concerns very seriously,” Sayers said. “If you look at what’s happening with Wet’suwet’en…If you look at Site C Dam and all the objections, the First Nations up there are not taken seriously and the government just says ‘that’s enough we’re going to approve the project.’ I really think [the government] needs the consent of Indigenous people before they issue an environmental assessment certificate.”

Sayers said obstacles that prevent a positive relationship between some First Nations communities and the government come from the government’s belief that their decision is superior.

“When [government representatives] sit down at the table with Indigenous communities they think that they always have that option to make that final decision, override the objections of First Nations and approve it. Coming to the table with that attitude doesn’t give you a lot of room to negotiate,” Sayers said. “In the clean energy industry in B.C. a lot of the companies have walked away from projects because First Nations have said no…and that’s the kind of attitude I think we need as well from corporations that want to develop.”

“There’s a lot of things to be gained by revamping the (environmental assessment) process based on Indigenous values,” Sayers said. “I think things really need to be changed around in a different way than they’re done now. There has to be weight put on Indigenous views and you just don’t see that happening.”

To view Indigenous knowledge and federal environmental assessments in Canada: applying past lessons to the 2019 impact assessment act in full, visit facetsjournal.com. 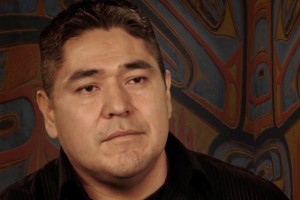 Nick Claxton, an assistant professor from UVic’s Faculty of Human and Social Development, and elected chief of Tsawout Nation, co-wrote the paper with Eckert. (1491 Productions photo)