Opitsaht resident Gene Antoine works as a diver in the Tla-o-qui-aht First Nation’s geoduck fishery. With the primary markets in China and Hong Kong, disruptions to overseas shipments have affected the lucrative fishery. (Photos submitted by Roy Alexander)

Shipment disruptions caused by the coronavirus outbreak have hit the Nuu-chah-nulth geoduck fishery, leading leaders to carry unused quota over to the next year.

The current geoduck season ends March 15, but the outbreak’s widespread effects on Chinese markets has already disrupted freight overseas, cutting off Nuu-chah-nulth harvesters from their biggest customers. As the vast majority of geoducks harvested from the west coast of Vancouver Island are sold to China and Hong Kong, a resolution was passed at the Council of Ha’wiih Forum on Fisheries in early February to “roll over any uncaught quota to the upcoming 2020 opening”.

Weighing an average of two to three pounds, the large, edible saltwater clam is dug up from tidal flats, harvested by divers using high-pressure hoses to excavate geoducks from clam beds. Harvest is restricted to certain areas along the coast, during times when shellfish testing determines that geoducks are safe for consumption. Hayu normally collects geoducks with a four-person boat, including two Nuu-chah-nulth divers and supporting crew members.

“They tend to be in deeper waters, so usually they’re only accessible at extreme low tide,” said Roy Alexander, advisor for the Hayu Fishing Partnership, which is owned by the Toquaht, Ehattesaht/Chinekint, Nuchatlaht and Hesquiaht First Nations. “They’re often mistaken for horse clams, they’re very similar looking - ­but the geoduck is the prize for its taste and its size.”

Eight Nuu-chah-nulth nations currently share one geoduck licence, which brought a total quota of 56,000 pounds over the last year.

“It’s one of the most sought-after fishes there is,” noted Alexander. “It’s the largest valued shellfish in British Columbia.”

With a typical landed value of $15-18 per pound, shipment disruptions to hungry Chinese markets pose a concerning and unexpected loss for Nuu-chah-nulth harvesters.

“For landed price, we’re looking at half a million dollars that’s in jeopardy here,” said Alexander. “We were sitting here waiting for the area closures to lift. They lifted about a week before the virus hit, and suddenly everything just went ‘clamp’.”

Since the coronavirus outbreak was reported on Dec. 31, more than 77,000 cases have been discovered in China, including over 2,600 deaths. The virus leads to a respiratory illness called COVID-19, an affliction untreatable by medication that can progress to pneumonia or kidney failure. Nearly another 2,100 cases have been detected in other countries, including 10 in Canada as of Feb. 24. With 23 related deaths identified outside of China, the World Health Organization has called the coronavirus an international public health emergency – but not a pandemic. WHO believes that the virus originated from a market in Wuhan where live animals were sold.

Fisheries and Oceans Canada have yet to agree with the Council of Ha’wiih decision to carry over unused geoduck quota. Other concerns with the fishery were raised during the Feb. 3 meeting in Campbell River, including any impact that a larger geoduck harvest could have on the herring spawn.

“If you could roll more over it’s going to have a longer dive season, so it’s adding to their problem,” remarked Andrew Jackson, fisheries manager for the Tla-o-qui-aht First Nation during the fisheries forum.

Two years ago the Maaqutusiis Hahoulthee Stewardship Society, which is led by Ahousaht’s hereditary chiefs, declared that the commercial geoduck fishery would be closed in the First Nation’s territory during the annual herring spawn.

“It’s a big impact to our fishery,” said Ahousaht member Kiista at the fisheries forum. “They are still a concern for Ahousaht, and we want to still push DFO for having that impact assessment done for the geoduckers.” 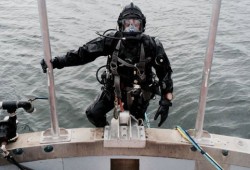