Ideas collected during a poverty reduction workshop recently held at the Port Alberni Friendship Center. The Alberni-Clayoquot Regional District faces a higher rate of child poverty than the rest of the province. (Mike Youds photo)

As governments claim credit for measured progress against child poverty, critics and advocates maintain there is much more they could do, particularly for Indigenous children, the country’s most marginalized and disadvantaged.

“They can do better,” said Adrienne Montani, provincial co-ordinator of First Call B.C., a coalition of child and youth advocacy groups. “We were pretty disappointed with the February budget. We were looking for additional dollars invested in child care.”

While applauding elimination of MSP premiums and the new B.C. Child Opportunity Benefit that begins in October, the coalition says funding is lacking for “upstream preventative family supports.”

“Investments in early childhood and infant development, poverty reduction, access to public services including quality child care and supports for youth aging out of care are key to better long-term outcomes for children and youth,” Montani said.

The coalition recently released its 23rd annual Child Poverty Report Card, showing once again that one in five B.C. children lives in poverty, a ratio exceeded in the Alberni-Clayoquot region, where it remains closer to one in three. ACRD has one of the worst child poverty rates in the province at 31 percent, far higher than the provincial average of 19 percent.

Data on Indigenous on-reserve child poverty in the ACRD are not available — a shortcoming that advocates want to see addressed — while the gap between Indigenous and non-Indigenous children has been well documented.

“Our children face the worst social and economic conditions in the country,” AFN National Chief Perry Bellegarde told provincial premiers in July. “They deserve an opportunity to succeed.”

Nearly half of First Nations children are in poverty

In the absence of statistical evidence, AFN worked with the Canadian Centre for Policy Alternatives to paint a clearer picture with a series of reports called Towards Justice: Tackling Indigenous Child Poverty in Canada.

“Measuring poverty for Indigenous peoples based on a technical definition of income or expenditure does not allow for a multidimensional approach to understanding poverty and its elimination,” the report notes.

Towards Justice cites a modest improvement in Indigenous child poverty rates while calling the pace of change “glacial.” Status First Nation child poverty fell to 47 percent from 52 percent between 2006 and 2016, a drop attributed to a higher proportion of children living off reserve.

First Call indicates the percentage of children age 0-17 in low-income families in the ACRD has increased to 30.7 percent from 29.5 percent in 2015. The region has the third highest overall child poverty rate in B.C. In Port Alberni, the rate is marginally lower, 29.3 percent.

Last week, Shane Simpson, B.C.’s minister of social development and poverty reduction, used Statistics Canada data to show progress, claiming a drop of about five percent between 2016 and 2018. Stats Can’s Canadian Income Survey also suggests fewer people in the province living in poverty in 2018. The official number dropped to 421,000 from 481,000.

“They need to keep their foot on the gas and fund some of these programs they started,” she said. “We really need to get government to think beyond the election cycle for helping children. Eliminating poverty can be one of the strongest ways of improving the economy.”

The Canada Child Benefit is credited with lowering poverty since 2016, yet people who don’t file income taxes are ineligible. The same is true of B.C.’s Child Opportunity Benefit.

“Again, it won’t benefit some of the poorest families,” Montani said. The coalition is working with the federal government in hopes of seeing some means of overcoming that limitation, she said.

Marcie DeWitt, a consultant with the Alberni Clayoquot Health Network (ACHN), agrees there has been progress against poverty.

“Much of what we have seen is an increased interest and willingness to address social issues from the municipal governments,” DeWitt said.

“I find it is frustrating when we have such high indices we’re working with and yet we don’t see too many responses working in rural and remote communities,” DeWitt said. “We have seen investments in the Alberni Valley in the last few years.”

ACHN has applied for a $25,000 planning grant through the B.C. Poverty Reduction Strategy.

“We’re really looking for information to direct us in areas where we can motivate changes,” DeWitt said.

Structural racism is largely to blame for the disproportionate number of First Nations children living in poverty, Montani said.

“We make a point always of saying this is the result of the ongoing legacy of colonization, residential schools, fracturing of families,” she said.

Indigenous or non-Indigenous, one of the consistently highest child poverty ratios in the province is that of single parent, female-led families, she noted. This helps explain why children are disproportionately affected by poverty.

That was made clear when she spoke to the B.C. Aboriginal Child Care Society with a room full of First Nation care providers in front of her. Some of them were earning minimum wage while living in poverty. One worker with five of her own children had to move in with her parents.

“It was such a wakeup call. Some of this, also, is listening to women who work in child care and who are poor,” she said, adding that “some nations have done a wonderful job of child care.”

“The Assembly of First Nations (AFN) noted in its own survey that 47 per cent of First Nations children live in poverty,” Karen Isaac, B.C. Aboriginal Child Care Society executive director, told Ha-Shilth-Sa. “Poverty has a profound impact on a young child’s right to survival and physical well-being as well as their psychological, emotional and spiritual development. Access to culturally based, spiritually enriching, high-quality Indigenous early learning and child care programs can help mitigate some of the impacts and help children thrive.”

“It’s frustrating because you don’t see changes overnight,” DeWitt concluded. “Results are a long time coming and don’t benefit people right away. Results are not seen within an election cycle.” 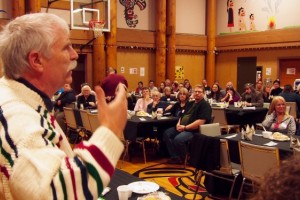