Nations step up to help the people during COVID-19 crisis

Tseshaht members weigh herring spawn on kelp fro distribution to elders on March 28. Vehicles lined up on the First Nation's reserve by Maht Mahs, so that volunteers could leave packages in trunks without making contact. (Denise Titian photos)

The COVID-19 pandemic has seen businesses forced to close and families ordered to stay home by Dr. Bonnie Henry, B.C.'s provincial health officer, leaving some struggling to get much-needed groceries and supplies.

The Ahousaht Emergency Operations Centre closely monitors the comings and goings of people in the community, recording who is traveling on boats and where they have gone. They have implemented a 10:30 p.m. community curfew and most people are staying indoors.

According to Ahousaht elder Wally Samuel, the nation's elected council and hereditary chiefs are working on plans to get support to members living off of reserve.

“There are more than 100 Ahousaht households in Port Alberni,” said Samuel, adding that it would be difficult to assemble that many care packages while maintaining safe social distancing.

In a March 20 press release, Hugh Braker, information officer for the Tseshaht Emergency Operations Centre, announced that the nation had declared a state of emergency. The declaration came as a result of the COVID-19 pandemic and will remain in place until June 30, 2020 with the possibility of an extension.

All public buildings, schools, daycare and administration buildings are closed. Access to Tseshaht playgrounds, cemetery and Papermill Dam Park are restricted, while hours have been reduced for the First Nation's businesses like Tseshaht Market and the Orange Bridge Cannabis Store, as staff are practicing social distancing.

Peterson Gus says that her program has funds which are being utilized to make care packages for Tseshaht members. In addition, she has reached out to local businesses like Tseshaht Market, Double R Meats, Circle Dairy and the Buy Low supermarket for support.

“There is a weekly distribution of food boxes for anyone that needs the help,” she said, adding that hundreds of care packages have already been distributed. “We exercise social distancing – only Tracy Robinson and I make the care packages, and this saves people from having to go from store to store looking for food – it's prevention.”

She went on to say that she and Robinson will continue to provide food boxes until they run out of cash.

“And if that happens, I'll find more cash – I'm good at that,” said Peterson Gus.

Like the fish and seafood provided by volunteers in Ahousaht, Tseshaht has also delivered seafood; halibut to the members one week and herring spawn on kelp to elders the following week. Peterson Gus said that one Tseshaht program supported some members with funds while another supplied grocery gift cards to families with children. 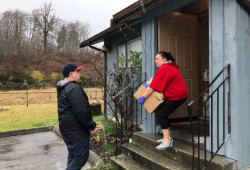