Suddenly homeless in a COVID-19 world: Family loses everything in apartment fire

Greta Andrew and her daughter Cassidy shop for necessities after losing their home. The family is now homeless after their apartment caught fire on Wednesday. "It’s sad some people wished this building would burn down, but then people didn’t think of how many people would become homeless," says Greta Andrew. (Submitted photos)

Greta Andrew and her husband Wilfred of Ahousaht have lived in the building for eight out of the last ten years. It's an older, dilapidated building that was home to low income people. In the shape an 'L', the building sits at the corner of Dogwood and 9th Avenue with the handicap access at the back.

The Andrews lived on the second floor closer to the front of the building with Greta's 80 year-old handicapped mother.

“She was diagnosed with dementia in 2012 and she broke her hip awhile back so she can't walk anymore,” said Greta.

Shirley John is in the late stages of dementia and is confined to a wheelchair. The Andrews care for her with special equipment they've collected over time; a hospital bed and lift, and a special wheelchair that allows Shirley to sit up and eat.

Greta says that false fire alarms are common at the building.

“We got used to it being pulled once or twice a month; firemen come up here for nothing and people got tired of waiting out in the cold so nobody wants to go outside anymore when they hear it,” she said.

“F*** sakes, somebody pulled the alarm again!” she recalled saying.

She told her husband she would get up to check.

“I opened our door and seen the smoke coming in the hallway,” said John, noting the smoke was grey, like campfire smoke, and it filled the hallway. “I got all panicked and said 'Wilfred! Cassidy! Get up! There’s a fire in the building!'."

Greta's 18-year-old daughter Cassidy was staying over for two weeks of self-isolation during the COVID-19 crisis. Greta estimates it took only five minutes for her husband to get dressed and get Shirley into her smaller wheel chair. They would have had to go down the long hallway and turn left down another hallway to get to the handicap ramp. But by the time they opened the door again, the hall was filled with thick, black smoke.

“The smoke was so thick and black that we couldn’t even see or even push my mother out to the exit in back, so we had to exit the side entrance, which only had stairs,” Greta shared.

Wilfred was forced to carry Shirley down the stairs then re-enter the burning building to retrieve her wheelchair.

“This isn’t something I could do (on my own) and I am forever grateful to my husband,” said Greta.

The family went to wait it out in their vehicle and that is when Greta realized she left her phone and wallet in the apartment and there was no way anyone could go back for it.

Greta said that some people were forced to jump from their balconies to escape the fire because not everyone took the fire alarm seriously. The building was destroyed by the fire, which started on the second floor on the same side as the wheelchair ramp.

The family waited outside for about 90 minutes, then went to the home of a relative. They were eventually put up in a hotel with other residents and given a week to stay there by an emergency response team.

Greta went back to the building later that morning and asked a fireman to see if he could retrieve her phone and wallet from her unit.

“He returned with it and told me he was sorry for all our belonging (that) may not be salvaged," she said. “That is when it became a reality that we lost a lot of our stuff that my husband worked for and all my pictures of my children and my late son."

It was then that she broke down and cried.

“Now we are in a hotel and have no idea where we’ll go after this,” Greta added.

While grateful for the hotel, Greta says it is hard to care for her mother without her equipment and supplies.

“We lost all her bedding stuff, she has no more soaker pads, liners or adult diapers,” said Greta, who had just struggled to lift her mother out of the tub in a cramped hotel bathroom.

Through tears Greta said she is grateful for the little bit of support she's been getting from friends and family.

“People are sending me $20 here or $50 there, telling me to get whatever my mother needs,” she shared.

Shirley needs mostly pajamas, leggings, slippers along with bedding supplies. Her bigger, better wheelchair that allows her to sit up during the day was lost in the fire, so she is even more limited in what she can do.

The Andrews don't know what the future holds for them but they hope they will be able to find a place to call home very soon. They have nowhere to store donations so they ask people to hold off for now, “but we sure can use it later on,” said Greta.

The family is accepting cash donations to help them through this time. E-transfers can be sent to hakum_99@hotmail.com. The Andrews say they are grateful for the help they have gotten so far. 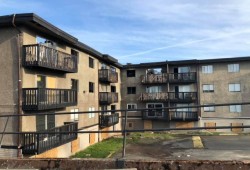 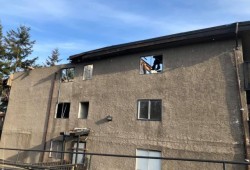