Leo Jack of Voyager Water Taxi stands with humpback carcass and crab traps on a beach in the Bunsby Islands northwest of Kyuquot. (Tracey Gosselin photo)

A necropsy to learn more about a dead whale that washed ashore in Chekleset Bay has been ruled out, but the find may help increase understanding of a rebounding humpback population.

The carcass of the juvenile whale was discovered by kayakers in late March, washed up on a beach in the Bunsby Islands northwest of Kyuquot. Water taxi operator Leo Jack learned of the find when he went to pick up the paddlers and he later reported the carcass to DFO.

“I’d never seen a dead one before,” said Jack, who has been ferrying kayakers around Nootka Sound for decades. He has seen dead minke whales but not humpback remains.

Commercial crab gear and rope were wrapped through the whale’s mouth and around its pectoral fin and tail, Jack said. The juvenile had obviously died some time ago and lay there for weeks or longer.

Jack’s son posted a photo of the whale with the traps on Facebook, provoking an angry backlash and threats against him: “He got a lot of hate mail,” Leo said.

DFO confirmed Tuesday (April 14) that a necropsy would not be possible due to the animal’s advanced state of decomposition. A Coast Guard patrol vessel located the carcass, took measurements and collected the crab gear last week.

A department spokeswoman said DFO’s marine mammal rescue unit will review that information, including an ID chip located in the buoy, to determine when and where the animal became entangled.

In the meantime, the department said it would work with local Nuu-chah-nulth nations that have an interest in collecting baleen or bones for social or ceremonial purposes. Otherwise, the remains will be left to natural decay and to nourish the food web.

A marine researcher based in Port McNeill said finding a dead whale is relatively rare, never mind finding one that might reveal how it died, which makes the discovery much more compelling.

“Most often whales don’t wash up dead, they sink,” said Jackie Hildering of the non-profit Marine and Education Research Society (MERS), which has studied local populations of humpback and minke whales for the past decade. “It is extraordinarily rare to find a dead humpback that can testify how it died.”

Hildering described the humpback’s death as “a morbid entanglement,” one of the more common threats to large marine mammals and particularly baleen whale species around the world.

Humpback whales are more prone to entanglement in fishing gear and boat collisions because they lack “bio-sonar,” the biological adaptation that enables other whales to navigate through echo-location. Their giant pectoral fins, a familiar sight to west coast mariners, make them more susceptible to snagging a variety of hazards. Some die, some survive if they’re able to shed the gear.

“We look for survivors to inform us through scarring,” Hildering said. “One half of humpbacks have scarring.”

According to one analysis, there were 40 reports of entangled humpback whales in B.C. waters between 1987 and 2008, including four confirmed mortalities. Assorted fishing gear, gillnets and traps were to blame in the majority of those cases, but herring-bait pond, long line and aquaculture gear were also a factor, along with seine nets and anchor lines.

Hildering believes the whale’s tragic death can play a positive role in raising awareness of humpback whales as their numbers increase along the coast.

“Shifting of humpbacks into the coastal waters of B.C. has been so sudden that most people don’t even realize we have humpbacks,” she said.

Among Nuu-chah-nulth peoples, humpback whales — “yayačim” — were commonly hunted, a rich and reliable source of food and oil. Prior to the 20th century and accelerated commercial whaling, humpbacks numbered more than 4,000 off the west coast of Vancouver Island with about 15,000 to 20,000 in the North Pacific overall.

Since whaling ceased a little more than 50 years ago, humpbacks have rebounded to about half their historic number. There are more than 2,000 on the coast although firm numbers are unknown.

MERS has observed a major increase in humpbacks in North Island waters, Hildering said. The increase has been too significant to attribute to population growth alone. More than likely, whales from other areas of the North Pacific are migrating here in search of food. There is no estimate of how many may fall victim to human-related hazards.

Though evidence is limited in this case by the whale’s advanced state of decay, lessons can be learned that may prevent entanglement deaths in future, Hildering said.

“It would have been an excruciating death. This whale did not die right away. It wasn’t ghost gear,” she said, referring to the frequent hazard of lost or abandoned fishing gear adrift at sea.

Another important lesson the society hopes to convey to the general public: Don’t attempt to disentangle a whale unless you have training and expertise to do it safely. The task is best left to professionals. First Nation guardians and watchmen are being trained to perform the task without getting in the water and possibly causing more harm than good to the whale, Hildering said.

The public can help prevent entanglements by cutting packing material, banding, rope and other looped material and not dumping materials in the ocean, DFO said. People are encouraged to report any marine mammal in distress in Canadian waters by calling the marine mammal incident report line at 1-800-465-4336.

Leo Jack figures the kayakers who found the whale carcass may be the last he sees for a while due to the COVID-19 pandemic and its impact on travel. He will probably divert to other tasks this summer. 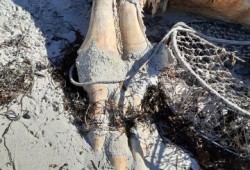 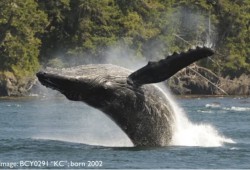