Jean Thomas, mother of the Travis Thomas, examines a raft that was recently found in the vicinity of where her son went missing in 2018. (Pat John photo)

A family living in isolation across the channel from Ahousaht saw the Ha-Shilth-Sa story of a mystery raft and came forward with the story behind it.

Nitanis Desjarlais said her family, who live in a remote place called Seitcher Bay watched the movie Castaway one evening. With nothing to do during the day the kids decided to have a raft-building contest.

According to Desjarlais, the girls constructed a raft from old life jackets while her boys, Tseeqwtin and Cheveyo, made one of sticks and jerry cans.

“The one made of jerry cans floated very well and I told them to tie it up,” said Desjarlais, adding that the rafts were built on the beach at low tide. “I didn’t want the raft to get away and have people thinking it was a pile of pollution.”

But someone forgot to anchor the raft and it got away.

“We even talked about what people might think if it were found,” said Desjarlais.

So, with a spotty wifi signal, the children were surprised to see their float-away raft on the Ha-Shilth-Sa webpage. Their mother said they were afraid they would go to jail when they saw the article.

“It’s the talk of Seitcher Bay today,” she said.

Ahousaht Emergency Operations and volunteers have been searching nearby beaches. Both they and the Canadian Coast Guard have been notified of the origins of the raft.

An early morning water taxi trip went from routine to intriguing for Pat John of Ahousaht today. As he approached the area of Catface reef, not far from Flores Island where Ahousaht is located, he spotted something odd floating on the water.

“It’s got jerry cans for floatation and a bunch branches tied to the jerry cans,” said John, who video recorded the discovery.

The collection of sticks is tied together with quarter-inch crab pot line, according to John. It was floating on two plastic five-gallon jerry cans along with about five smaller jerry cans, the nozzles taped shut.

John retrieved the raft and brought it to Ahousaht, then contacted the Ahousaht RCMP detachment.

According to Darlene Dick of Ahousaht, crews were preparing to go out and search the area.

A member of the Canadian Coast Guard stationed in Tofino hadn’t been contacted directly about the find, but had heard about it third-hand and dispatched a vessel to the area.

“This is all very new to us – we have no idea of what’s going on,” said the Coast Guard member.

Nobody is aware of any recent missing persons cases from the area.

The last person to go missing was Travis Thomas of Ahousaht. He went missing from Bartlett Island in the summer of 2018.

Both Bartlett Island and Flores Island are in the vicinity of Catface reef. 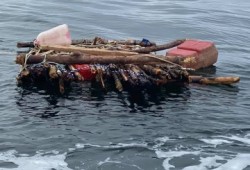