Craig Charleston, the main chef at The Market & Café, works at the Huu-ay-aht-owned business in Bamfield. The Café is among the First Nation’s businesses affected by COVID-19, but Canada’s current wage subsidy program doesn’t cover the restaurant’s closure. (Heather Thomson photo)

Officials from Huu-ay-aht First Nations are very concerned they are being excluded from a national wage subsidy program.

But they are also optimistic changes will be on the horizon.

Earlier this month the federal government introduced the Canada Emergency Wage Subsidy (CEWS). The program allows certain employers who have been affected by COVID-19 to receive a subsidy of 75 per cent of their employees’ wages for up to 12 weeks.

The CEWS, which is retroactive back to March 15, will continue until June 6.

The CEWS is intended to have businesses hire back workers that were laid off because of COVID-19 closures or concerns. The program is also intended to help prevent additional job losses and hopefully have businesses quickly resume their operations once restrictions are lifted.

“We’re going to be severely impacted,” Dennis said about the effect on businesses from his First Nation if changes are not forthcoming to the CEWS.

Huu-ay-aht’s tourism businesses and its campground are currently closed.

After CEWS details were announced the Canadian Taxpayers Federation released a feedback report. The report included information that some business structures could have been inadvertently left out.

These included Indigenous businesses that are community-owned enterprises. These businesses on First Nations are tax exempt under the Income Tax Act. But they don’t appear to be eligible for the CEWS since they are not a taxable corporation.

Also, the Huu-ay-aht First Nations Group of Businesses appear to not be eligible since they operate businesses as limited partnerships and thus under the CEWS are not comprised of eligible employers.

Dennis said he believes federal officials will need to make some changes to the CEWS – or introduce another program - in order to include Indigenous businesses that currently do not qualify for the subsidy.

“I’m very hopeful that we will qualify,” he said. “This is something that we will have to bring to our MP’s attention. Hopefully we can get some positive response.”

Patrick Schmidt, the Chief Executive Officer of the Huu-ay-aht First Nations Group of Businesses, said many others are in the same situation as they are also currently not eligible for the CEWS. That would include other Nuu-chah-nulth First nations and Indigenous communities across the country.

“It will apply to everyone,” he said. “That’s why we think it was just an oversight on their part.”

Schmidt praised the work some federal officials have been doing during these challenging times. He believes those officials are working as quickly as possible to assist Canadians through various financial programs. Schmidt is also hopeful changes will be made to the CEWS to include Indigenous businesses who currently do not qualify.

As proof federal politicians are willing to listen, Schmidt points to the Canada Emergency Response Benefit (CERB), which provides temporary income support for those who have stopped working because of COVID-19. Once it became apparent some Canadians would be excluded from receiving CERB payments, changes were made to the program to include others.

Schmidt is hoping the federal government will also make alterations to the CEWS to include those who currently do not qualify.

“It is a bit of a challenge but the issue needs to be highlighted,” he said.

Nuu-chah-nulth Tribal Council Vice-President Mariah Charleson is among those also hoping the Canadian government steps up and makes some changes.

“A more flexible model that will accept and support First Nations businesses and partnerships with emergency wage subsidy supports would be a great leap in the right direction of reconciliation,” she said. “When First Nation businesses are falling through the cracks, we ask for those cracks to be filled with solution and to work in a collaborative way that leaves no business or person left out.”

Charleson added in order to qualify now for the CEWS, employers from seasonal businesses must be able to prove a 15 per cent drop in their revenues during the month of March and a 30 per cent reduction in following months. Charleson said those who rely on seasonal and contract work would be unable to prove this.

“As many of the businesses that operate within Nuu-chah-nulth territories are seasonal, my worry is that they will not qualify for CEWS,” she said. “Special attention is required for seasonal operating businesses to ensure they do not fall through the cracks and to ensure that COVID-19 does not shut down a business that may make their entire income within one particular season of operation.” 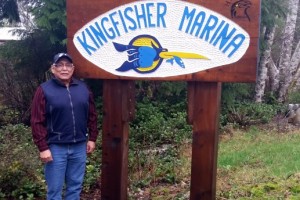 Huu-ay-aht Chief Councilor Robert Dennis Sr., stands at the Kingfisher Marina, one of the businesses owned by the First Nation.