Carolina Tatoosh, who operates youth and seniors programs for Hupacasath First Nation, is one of this year's recipients of a BC Achievement Foundation award.

But it is uncertain when Tatoosh, who has served as the youth and elders community work co-ordinator for Hupacasath First Nation for the past two decades, will be presented with her BC Achievement Foundation award.

Tatoosh is also not sure when she will be able to return to her job for which she is being recognized. She was laid off in mid-March when restrictions were put in place to hopefully limit the spread of COVID-19.

It was announced on April 27 that Tatoosh is one of 25 individuals from the province who will receive a BC Achievement Foundation award this year. But a presentation ceremony in Victoria to recognize all recipients in late April was postponed due to pandemic restrictions. A rescheduled date for the ceremony has yet to be announced.

This marks the 17th year provincial officials have handed out the BC Achievement Foundation awards. They are presented to residents of the province who build better, stronger, more resilient communities and shine as examples of dedication and service.

“You don’t do your job to be nominated for anything,” Tatoosh said. “You just do your job. But it’s nice to be recognized for those people you’ve been around for so many years.”

Before becoming Hupacasath’s youth/elder co-ordinator 20 years ago, Tatoosh had spent seven years as a community worker for the First Nation, providing in-house care for elders.

There’s no denying Tatoosh has been a key member of the community for many years now. But she also is pleased with how she has been received.

“This job has been one of the most important opportunities that I have ever been given,” she said. “I love my job and most of all I love the Hupacasath community for opening their arms to me.”

Tatoosh has equally enjoyed working with youth and elders.

“Working with youth for the past 20 years has allowed me to live out my own youth through play and crafts,” she said.

Programs she has spearheaded include after-school arts and crafts sessions, swim outings and tutoring at the First Nation’s youth centre, which opened a half dozen years ago.

“You name it and we’ve done it,” Tatoosh said.

For seniors, she has held countless excursions.

“Most are outside activities,” she said. “Every single month we go to another community on the island. They kind of dictate to me what they want to do.”

Tatoosh said she has greatly benefitted from these outings.

Tatoosh has no idea when she’ll be able to return to her job.

“I'm not going to lie,” she said. “At first I was happy to be off because I felt like I was burning out. It’s almost like the universe said here's a couple days off. But now I am missing the kids. We keep in touch through Instagram.”

Tatoosh, however, realizes it will in all likelihood be a summer unlike one she has had in numerous years.

“I am so worried about what summer is going to look like for the kids because we are so used to being at the lake, camping and enjoying all the different programs that are scheduled to keep them busy,” she said. “I usually have them every day during the summer because parents are working or fishing. This has disrupted so many lives in so many different ways.”

Tatoosh added a youth conference that several Hupacasath youngsters had planned to attend in Kelowna has been cancelled.

Though she isn’t sure when she’ll return to work, Tatoosh realizes there will be plenty to do once there is some sort of normalcy. In fact, she’s contemplating asking for some additional support via a part-time worker to assist her with all of the programs she provides for youth and elders.

“We’re getting more and more kids and more people (out for programs),” she said. “I don’t think it’s a job for just one person.”

Tatoosh added her husband and daughter Lindsey as well as several others have contributed to the success of Hupacasath programs she’s operated.

“When I’m over capacity and need a second person my husband or daughter or both will come out to chaperone,” she said. “I really could not have done my job without their support and so many others, too many to mention. This job has been a team effort.” 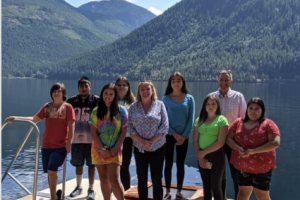 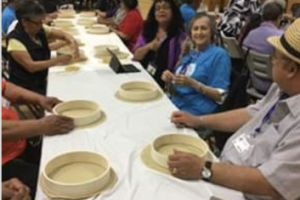 Drum making sessions are among the activities Tatoosh has organized as a Hupacasath community worker.