Residents from the remote Indigenous community of Alert Bay will once again be on the receiving end of some generosity.

Earlier this month fishermen from the Tla-a-qui-aht First Nation arrived at the ‘Namgis First Nation in Alert Bay to deliver almost two tonnes of fish, which was then distributed to residents in pandemic lockdown.

Despite its remoteness on Cormorant Island, which is located east of Port McNeill, Alert Bay had a COVID-19 outbreak. The community had 30 positive cases and one of its female residents died in April. She became the first person in an Indigenous community in British Columbia to succumb to the coronavirus disease.

Alert Bay residents are expected to once again benefit from the generosity of others next week.

That’s because Teara Fraser, a Vancouver-based Métis woman who owns Iskwew Air, will fly to Alert Bay to deliver thousands of dollars in essentials that have been donated.

Fraser, the first Indigenous woman to start up her own airline company, has agreed to make flights delivering essentials to Indigenous communities.

Fraser will make a flight to a different community for every $6,000 raised through the crowdfunding campaign called Air LIFT and which can be viewed at https://fundrazr.com/AirLift2020?ref=sh_16xwlf_ab_4UCiKzm4aB44UCiKzm4aB4. Money raised for each flight will go towards purchasing supplies for the communities, airplane fuel and other operational costs of making the delivery.

“I’m a bridge builder,” said Fraser, who launched Iskwew Air, which operates out of Vancouver International Airport, last March. “I’m a Métis woman and part of my responsibility is to build bridges.”

Fraser will be delivering not only food but also masks and other essential supplies needed in the communities.

“Iskwew Air was built on a desire to uplift Indigenous people and communities,” she said. “This is what I’m passionate about.”

Fraser added she would have preferred not to be doing this work.

“In an ideal world, Indigenous communities would have everything they need and something like this would not be needed,” she said.

Alert Bay was chosen in part because of the death of one of its residents and the fact the community has been reeling while in lockdown from the pandemic.

Fraser is hoping to fly to the community this coming Tuesday to make her first delivery. But the trip will be dependent on the weather.

“We won’t know until the day before (what the projected weather will be),” she said.

As of Friday morning, more than $5,100 had been raised via the campaign. Fraser said sufficient funds had been secured and she would indeed make her first delivery to Alert Bay this coming week.

And she’ll have to start thinking about following deliveries.

“I should figure out what’s next,” she said, adding a second community will in all likelihood be selected this Saturday. “If we start getting some ground movement on this campaign, which I’m hoping we do, we need to know where we’ll be going.”

Whenever possible, the essentials that will be delivered to the various communities will be sourced from Indigenous businesses, providing them with a much-needed boost as well.

Fraser is uncertain whether any of the 14 Nuu-chah-nulth First Nations would be able to benefit from this venture.

“There are some communities I would love to serve but they don’t have strip access,” she said.

Fraser added if need be, it is possible to fly into one location and then have essentials delivered to another nearby community. She said the number of deliveries she ends up making will be dependent not only on the funds raised but also with what communities need.

Some pandemic restrictions are being lifted throughout British Columbia and more businesses are opening their doors once again. Thus, it’s difficult for Fraser to predict how much longer communities will have a need for essentials.

“Everything in our world is shifting and it’s changing so quickly,” she said.

Fraser will be making her deliveries with her plane, a twin engine PA31 Piper Navajo Chieftain, which is called the Sweetgrass Warrior.

“It’s fantastic to have a small plane and be able to fly where the needs are,” said B.E. Alink, the manager of the crowdfunding campaign.

Like Fraser, Alink is hoping several other Indigenous communities are able to benefit from this venture.

“When there is a request and government is too slow to respond, hopefully we can respond,” Alink said. 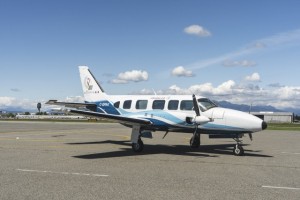